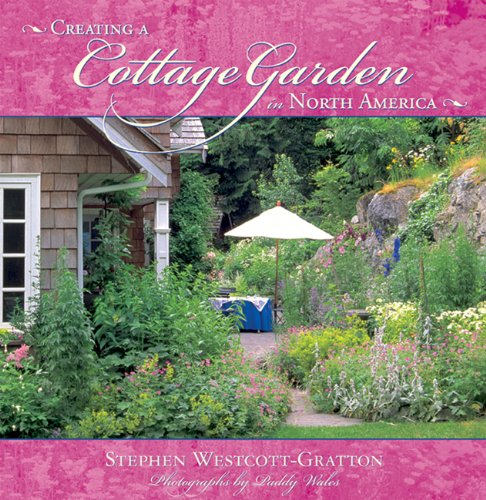 “The cottage garden is a profusion of flowering plants and produce, all growing together in a glorious jumble. …The push is…to make the most of every inch.” Westcott-Gratton, pg. 7.

“…to achieve the abundant look, plants have to be placed very close to one another, and therein lies the secret of the cottage garden: Dense planting will go a long way in keeping weeds of your garden….” Westcott-Gratton, pg. 8.

“… as one crop is harvested, another takes its place. … This technique has recently been referred to as ‘square foot gardening’–not a bad moniker, since it remains us that every square foot of land is important and should be encouraged to produce to its potential.

“The idea of planting for a succession of crops was foremost in the English cottage gardener’s mind, since arable land was often scarce and always precious. The same can be said for many of the pioneer style or doorway gardens of the early North American settlers. While some of these gardens may e said to stem from the classic English cottage garden style, they were also influenced by the traditions of the settlers themselves, and usually reflected their country of origin, be it Dutch, Irish, Scandinavian, or German. ” Westcott-Gratton, pg. 11.

“In the late sixteenth century, the breeding of auriculas led to another craze for what was known as ‘florists’ flowers’ The florists’ movement, originally contained to cottages working from their homes, fostered many of the horticultural societies and clubs that exist to this day. The florists had nothing to do with flower arranging–it was simply the name that was given to cottagers who grew and hybridized these specialty plants.” Westcott-Gratton, pg. 21.

“It is heartening to remember that cottage garden plants are a pretty tough bunch to begin with. Early cottagers worked long hours and didn’t have time to fuss with floral dilettantes. They needed low-maintenance plants, so most traditional cottage garden varieties are robust enough to have survived the vagaries of the last two or three centuries without much human intervention:” Westcott-Gratton, pg. 24.

“Not only are most old-fashioned (or heirloom varieties more vigorous than their modern counterparts, they also smell an awful lot better. Roses are a good case in point. Almost without exception all old roses have a scent so wonderful that it’s paradoxically ethereal and sinful all at once. Not so the newer hybrid teas. They have been bred for continuous bloom, a statuesque form, and thick long-lasting petals in some rather loud colors not found in nature.” Westcott-Gratton, pg. 25.

“Originally intended to keep the livestock in and the wildlife out, fences totally primarily delineate property boundaries, Nevertheless, their importance to the cottage garden style can’t be ignored….” Westcott-Gratton, pg. 27.

“The majority of the structures in your cottage garden will hardly seem like structures at all, since they are an integral part of most working gardens whatever the style. The two most important watchwords when considering what to include in your garden must always be ‘rustic’ and ‘simple.’ Ornate furnishings strike a discordant note in the cottage garden, and in any case, the cottages would never have been able to afford them…Elaborate urns, baroque fountains, and Greekstatuatry should be avoided at all costs. Garden structures can certainly act as accents, but they should be subdued enough that they never distract the eye from the focus of the garden, which is, or course, the plants. themselves.

“Traditional cottage gardens are usually enclosed by a fence or a shrub border, or both. In North American, a white picket fence will unquestionably be obligatory for purists.” Westcott-Gratton, pg. 43.