Skip to content
Autumn Caladiums Canna Rain
jackikellum
A Garden after a Rain, Autumn in the Garden, Autumn Mums, I Love the Rain, Listening to the Rainfall

Yesterday, I was working in my garden, and everything was distastefully dry and parched, but the air was heavy from the humidity and the heaviness that often presents itself prior to a rain in the South. In anticipation of the coming rain, Even though it was nearly 100 degrees outside, I forced myself yesterday to plant a few things in my garden, and I tried to water things after that. Like drops of sweat hitting a hot pavement, the earth absorbed any moisture that I tossed its way, and I don’t believe that my watering efforts were very effective, But about 8:00 last night, it began to rain. I immediately opened my window and listened, and I listened the rest of the night. Like a blanket that had washed over me and cradled me, the rain had watered my soul.

Last night, it was too dark to film the rain, but this morning, I threw open my back doors, and I revele at the carpet of the still-wet and glistening garden that spread out in front of me.

Some of the plants seem wetter than others this morning, 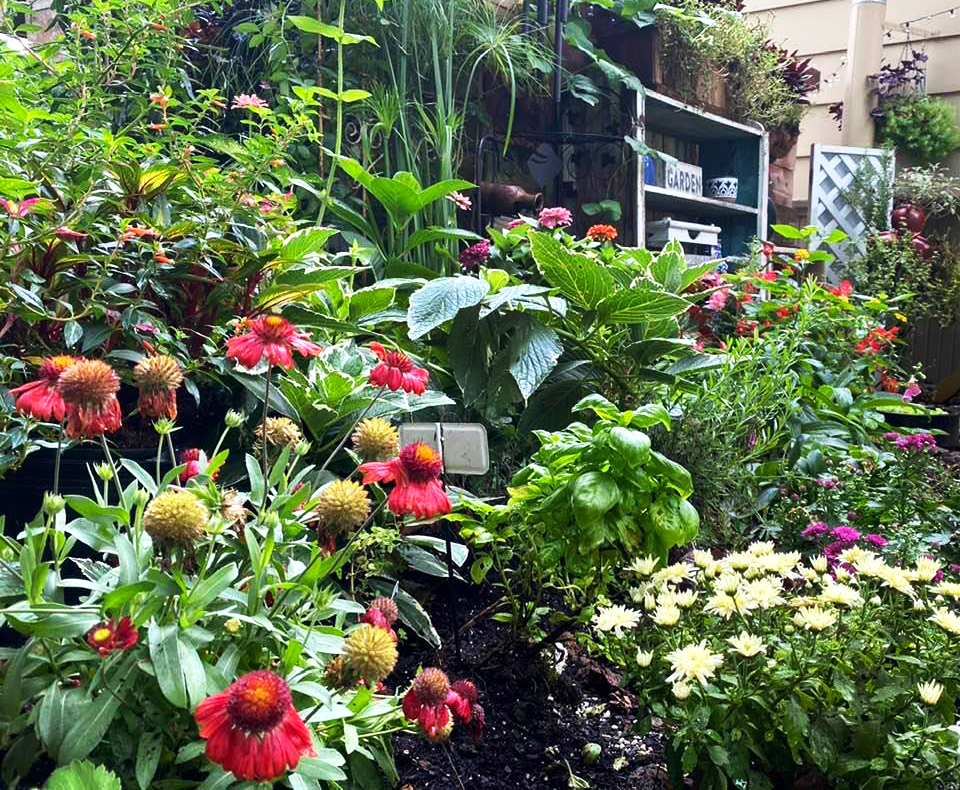 But the feeling of moisture was pervasive all around my patio area. 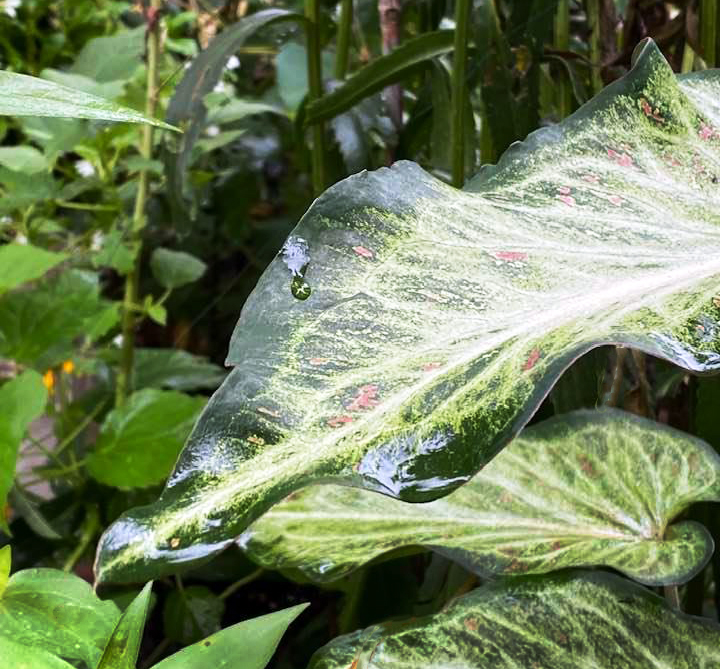 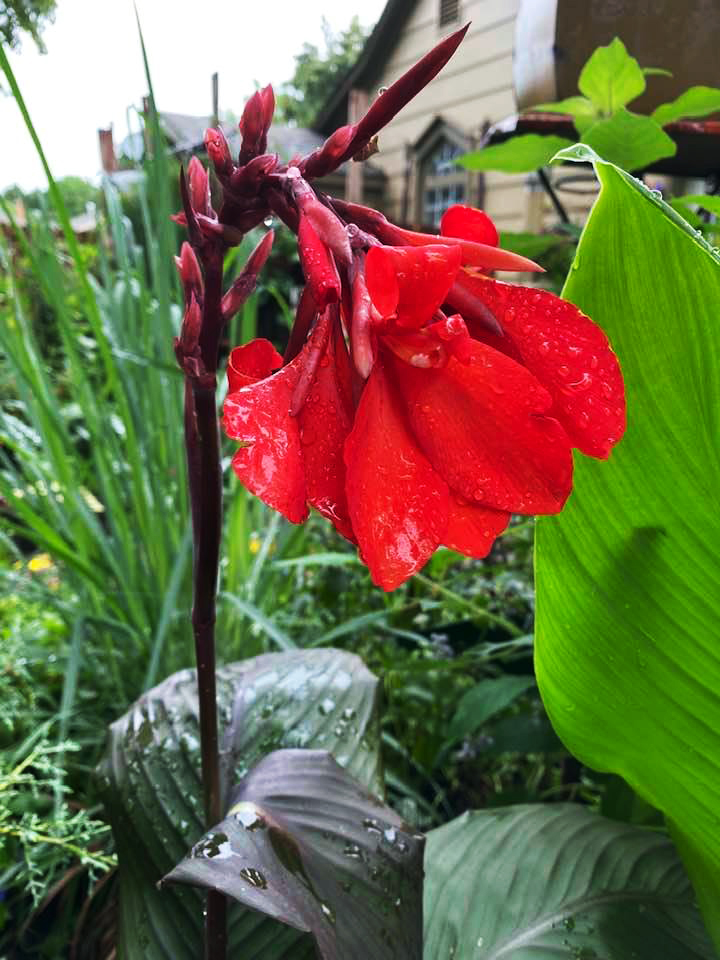 Canna Hanging from the Raindrops in Jacki Kellum Garden

But many of the plants were absolutely pendulant early this morning, after last night’s rain.

So, after a few minutes outside, sniffing the moisture and after allowing a few, fresh raindrops to sprinkle on my skin, I went back inside and made a cup of coffee, but most definitely revived, because I love the rain.

I Love the Rain

I am not exactly sure when I first realized that I loved rain, but I believe that it was at camp, because it was at camp that I learned to love much about nature. Even as young children, the kids at my camp slept in cabins that hardly had exterior walls. At least 2/3 of the walls were screened, and it was almost as though we were sleeping in the very arms of nature itself.

The cabins at my camp had no electricity, no bathrooms, and had very little else to keep the elements away. On cooler nights, the evening’s vapors would filter through the screen and swallow me, regardless of how deeply I dug into my sleeping bag. I loved the cool, damp sensation of camp’s night air–or perhaps it was the snuggling that I loved more. Probably, I just loved both.

When the night grew very late, I would often hear small animals picking through the leaves outside the cabin’s walls. It always seemed that whippoorwills and owls perched no more than 5 feet from my bed, and I always felt as though everyone else in camp was asleep, and I lay awake all alone–listening to the night sounds of nature. It was a feeling of being alone and yet, not lonely.

That phrase probably summarizes my life, and that is probably why I love the rain. Rain is moody, gray, and wears a feeling of aloneness, all of its own.

At my camp, the cabins had galvanized metal roofs–or tin roofs. I loved to hear the rain, filtering through the trees and then tapping the tin roof and sliding from it one drop at a time.

The softer rains would ultimately pierce through the crust of leaves that lay on top of the ground. The leaves would rustle, crackle, and fizz.

The dust on the tree leaves outside would be moistened, and the aroma of the moistened earth would fill the air. The smell of the evergreens would be refreshed, and the woods would take on  the scent of a  rain potpourri that I wish I could bottle or bag.

When it rained hard at camp, the trees got involved with the ceremony and waved their arms, shook their heads, and wildly swayed.  Like savages dancing around a ring, preparing for a bountiful hunt, the trees would toss spears into the air and fiercely hurl things about. A tree limb would occasionally scrape across the metal shelter, screeching as it slowly etched its way over the top.

Also when it rained hard, the drops of rain would pound the tin top, and the belting would become a roar. Torrents of water would form at the edges of the galvanized roof and would flood, like water being sloshed from a tub, down to the ground below. The river of rain water would get behind piles of leaves and branches on the ground and push them downstream.

When the rain was not pouring, I liked to put on my squeaky, new rubber boots and my cold, stiff raincoat and walk outside. I loved the way that a misting rain would form on the exposed parts of my body. When there were actual rain drops falling, I liked to feel them pat my face and then roll.

Like Mother Nature’s bathtub, rain is how the world is washed clean, and when I am in the rain, I feel that I am being cleansed, too.

In my bedroom now, my bed is immediately next to a window that I frequently open to allow nature to come inside. Every time that it rains,  I pull the glass back and listen–and I feel.

If I were filled with magic,
Everyone would hear the rain tap on their tin roofs–and feel,
And no one’s roof would leak.