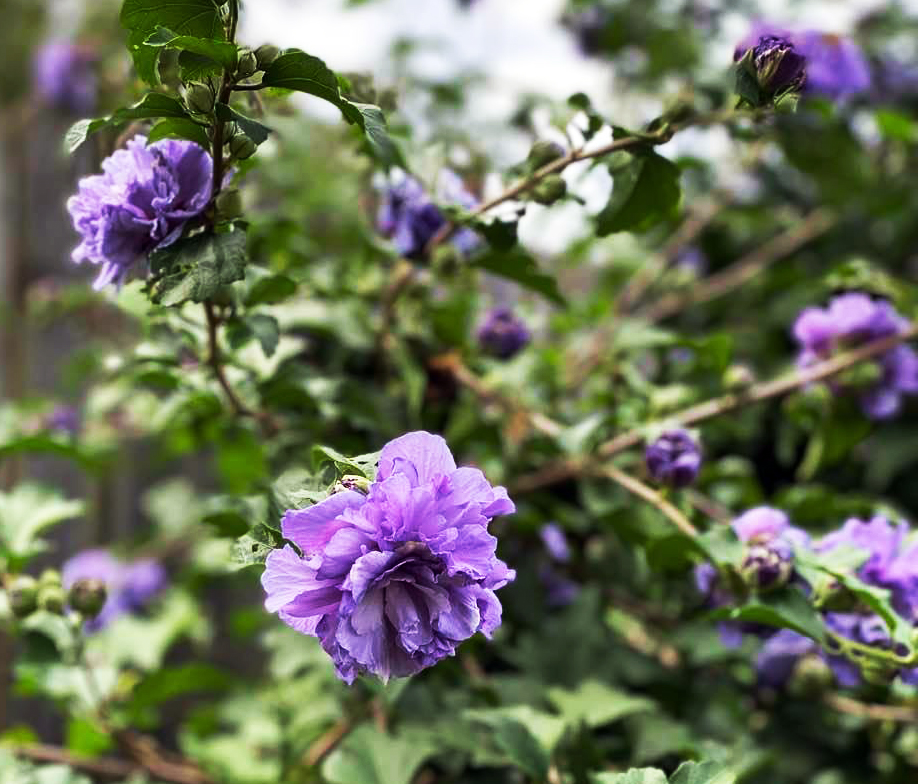 Today, I went out to my favorite nursery in Harrison, AR. My goal was to buy a new Christmas tree to plant in my garden. When I explained to the owner of that nursery my purpose for this Christmas tree, she sent me to the very back of of the nursery, and along the way, I spotted the most gorgeous Blue Althea that I have ever seen before. It was not for sale. It was planted on the back of the nursery’s property. What a sight! 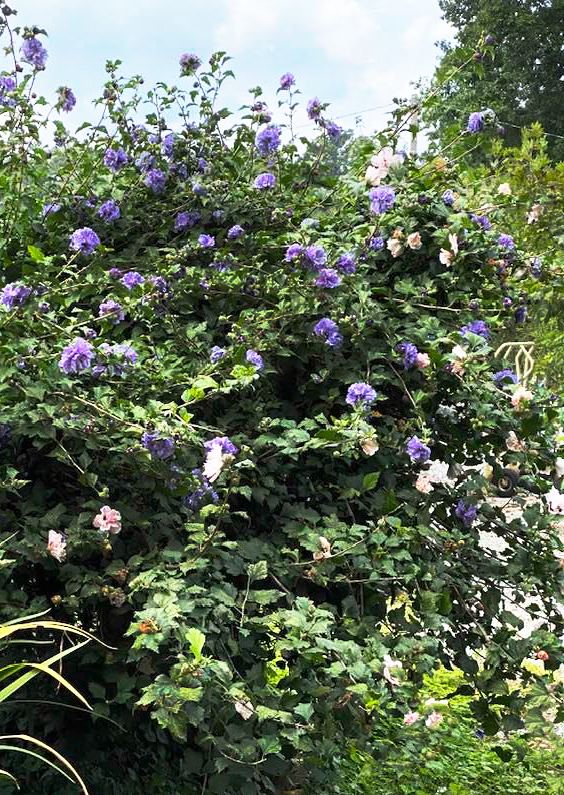 A light pink althea seemed to be growing out of the same spot where the Blue Altheas was growing, and the combination was breathtaking.

Confession #1: I Didn’t Think That I Liked Blue Althea Plants

Earlier this year, I was buying an althea to grow in my garden. That was before I discovered the nursery that I visited today., and the manager of that nursery said that they would be getting the Blue Althea plants during the fall. My quick retort was: “Oh, that’s ok. I don’t like blue altheas. They always look fake to me.” Well, that was just a worn-out thought that I had been dragging around for at least 40 years.

Life Tip #1: Don’t Believe Everything That You Think!

Today, when I was studying the Blue Althea at Plants, etc., I knew that I had been wrong about blue altheas. My snap judgment was a result of something that I had seen when I was much, younger and living in Mississippi. At that time, I was living in the older, Belhaven area of Jackson. My neighbor had a yard full of altheas that were multiple shades of pinks and whites, and he had no blue altheas. I simply assumed that he was correct in having not planted any blues. I assumed that Blue Altheas were not appropriate. While I could deflect and tell you all the problems that arise from assumptions and from dragging opinions along from our pasts, I’ll decline to do that for now. 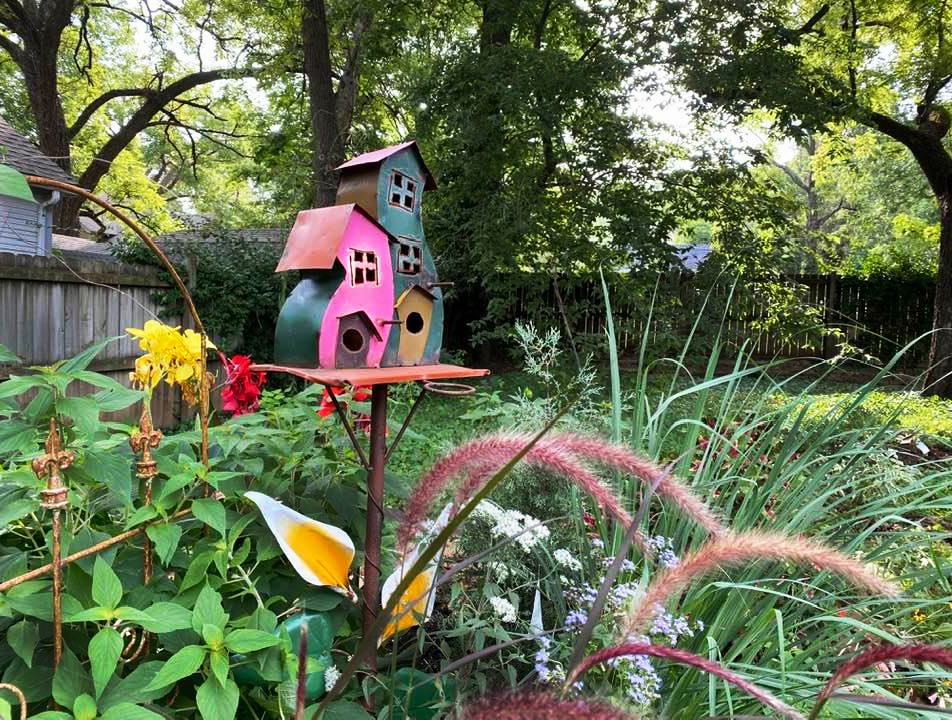 So back to my visit to the nursery. As I said before, my reason for plant shopping today was to buy a Christmas tree for my garden. No, I didn’t want a fancy Spruce or Juniper that was temporarily resting in a burlap bag and that I’d place in my home, in that same bag, sometime after Halloween. I wanted a Christmas tree that would LIVE in my garden, both at Christmas time this year and throughout the rest of my time while I’m living where I have planted it. If you squint, you might see that I planted my garden’s Christmas tree in the prime real estate that is behind my birdhouse. I wanted the tree to be readily visible any time that I looked out my back doors, which are glass.

I told the owner of Plants, etc,, that I didn’t want an expensive this-or-that evergreen, but the expense of such a plant was only part of that issue. What I wanted was a plain, country Christmas tree–one that reminded me of old-fashioned Christmases on the farm. 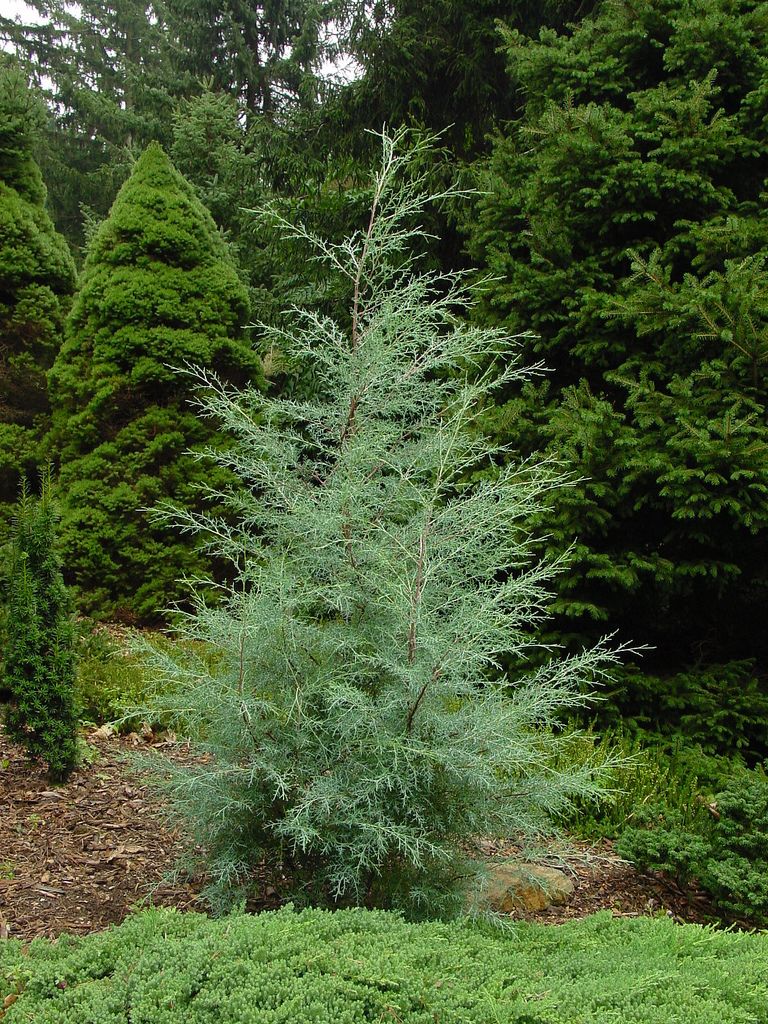 I already know that my Carolina Cypress will soon outgrow its new home, and when it does that, I’ll be forced to move him to the back of my property and to put another one into his place. But I had a specific reason for wanting to buy this almost scraggly-looking Christmas tree. I planted it to remind me of the ones that grew on my farm in Mississippi. You see, I have a personal tale to share about a Christmas tree like the one that I bought today: About 30 years ago, my children and I lived in Mississippi, and we had the good fortune to buy a little farm outside of Madison, MS. The front part of the property was cleared for pasture, and there was a barn in that front area. The land was a very gently rolling piece of property, and the house sat about 2/3 of the way back. Behind the house, there was a wonderful forest area. I had attended camps all throughout my youth, and I was thrilled to own a little piece of woodland for myself.

We moved to that farm during the late summer time, and soon after we moved there, my older children started 4th and 6th grades. Just a few days later, after school one day, my 4th-grade-son disappeared for a few minutes and afterward, he came dragging a tree out of the woods. Unlike the image in the above photo, however, it was not Christmas time. It wasn’t even cold. Rather, the time was during early September, and it was still as hot as blazes outside in Mississippi that day. I’ll never forget the moment that I saw that little boy coming across the land, pulling that tree behind him, and as soon as my son reached the door, he grinned and said, “I’ve cut down our Christmas tree.”

At the time, my heart fell. One of my camp trees was now gone–forever–but I’ll never forget that child’s joy in thinking that he had contributed to our first Christmas on that farm. That little boy is nearly 40 now, and he has children of his own, but when I went to the nursery today, I was set upon the task of finding my little boy’s Christmas tree once again, and I did just that. Afterward, I planted it, andmy forever Christmas tree is now living in my yard, somewhere else.