During Colonial America, many people grew kitchen gardens that are the precursors of today’s cottage gardens.

Penn State has published an article that details the history of the Colonial Gardens of America:

“Although the colonial period ranged from 1600 to 1775, American and European garden designs did not change very much from the 1600s to 1840. During this time, colonists were preoccupied with independence, and few new gardening books were published. that Available books originated in Europe, with very few published in the Colonies.

Colonists and Europeans often exchanged plant material. Species from the “New World” were shipped to England, and plant material that originated in areas such as Mainland China traveled through Europe before making the trip across the Atlantic Ocean. Plants brought to the Colonies included fruit trees, vegetables, herbs, and flowering bulbs. They were placed in gardens with plants native to the United States, including tobacco, corn and other vegetables, trees, flowering shrubs, vines, and wild flowers.

“Colonial gardens in the United States were quite diverse, influenced chiefly by the regions from which the colonists immigrated. Early immigrants brought many of their garden designs with them. Colonists of French heritage created gardens with a French influence. Colonists from England and the Netherlands created gardens that reflected their traditions as well. But despite these differences, all European and colonial gardens developed from Tudor and Medieval gardening styles.

Colonists did not develop or use garden plans as landscape designers do today. Instead, gardens differed depending on the colonists’ needs.

“Herbs used for cooking, medicine, and fragrance were mixed in with vegetable plantings. The only exception to this arrangement was for pungent herbs; these were separated from vegetables, hence, there were no true “herb gardens.” As gardens evolved, fruit trees were also slowly incorporated into the garden from outside edges to focal points in the center of the garden squares or rectangles. Larger vegetables such as snap or green beans, maize, and pumpkins were grown in large, outlying fields. Colonists took advantage of hills on their property and planted crops such as peas, lettuce, and radishes earlier in the season on southern-facing slopes to take advantage of the warmer soil.

“Working-class colonists who lived in town on small, rectangular lots had gardens that were smaller in scale than those in rural areas. Colonists who were wealthy had more elaborate gardens. Layouts were formal with symmetrical gardens framing walkways. Wealthy landowners motivated changes in garden style since they had the resources and time to experiment with new arrangements.

“Modern-day gardeners need to work with the size yard that they have and incorporate square- or rectangular-shaped beds that allow room for walkways and focal points such as wells, fountains, or seating. Keep the scale in proportion by including a few trees, but do not crowd the garden area. Lists of plant material that were grown by colonists are quite extensive. To develop a plant list for your garden, consult a book on colonial plants that contains descriptions of the plants, the genus and species, and examples of how plants were arranged in the garden. Some suggested books are listed below. A few of the books are out-of-print; consult your local library for a copy.” Penn State Extension Better Homes and Gardens distinguishes from a more formal Colonial garden and a Cottage garden:

“Colonial gardens, after all, were mainly utilitarian — a place to grow vegetables and herbs tidily behind a white-picket fence. They often had a formal design or feel.

“Cottage gardens are largely the opposite: They’re lush, blowsy places that are anything but formal. Packed with plants, it’s common to see annuals, perennials, and herbs spilling over, or even partially blocking, pathways. You’ll often see structures such as a white-picket fence or an arbor in a cottage garden, though it’s anything but formal.” 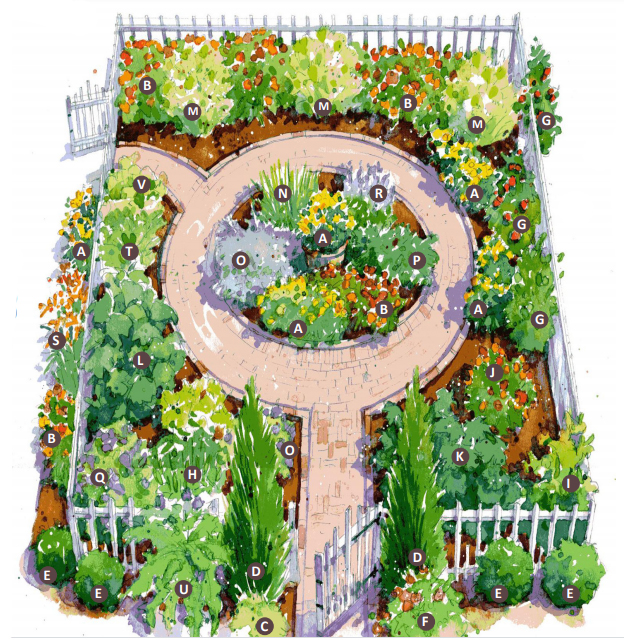 The Plants List for the Above Garden Plan is as Follows:

A. Marigold
B. Zinnia
C. Petnia

“During the Middle Ages, monks in France typically created kitchen gardens with geometrically shaped beds, separated by paths and enclosed by a wall or hedge. This French-style kitchen garden plan reflects this aesthetic with a central diamond-shape bed with four larger raised beds around it and wide brick pathways running between them. A row of ornamental perennials or shrubs of your choice can serve as a hedge around the perimeter, set off by a white picket fence. The raised beds are filled with a variety of vegetables, herbs, and edible flowers, as a nod to the efficient yet beautiful gardens of Medieval monasteries.” The plants for the above garden are similar to that of the Colonial garden.

One of my favorite of the garden plans that BHG has created is that of their mini kitchen garden plan for children:

This will sound nuts to some, but I have already planned my vegetable garden for next year.  At the top of the garden, I will plant the mini pumpkin and morning glory obelisk that I found on the Better Homes and Gardens online site.  I plan to plant the sunflowers and strawberries–the whole nine yards, but after I decided to plant the mini pumpkins, I began to wonder what I’d do with all the little fruits of my labor.

The mini orange pumpkins are called Jack Be Little.

Pumpkins Growing On An Obelisk in Jacki Kellum Garden

I’ve grown pumpkins before, and they are exciting plants to watch develop–a definite thrill for kids of all ages.  The only problem is that full-sized pumpkins [like the Connecticut Field Pumpkin growing above] require a large and sunny garden, and although my garden is large, my sunny area is small.  The mini guys seem to be my best best. The full-sized pumpkins in the above photo soon overcrowded and were attacked by powdery mildew.

If the obelisk is large enough, you could even vine some decorative squashes and gourds on it–or you could grow those on another trellis.

The pumpkins and gourds are good for fall decorating, but I am also heartened to know that mini pumpkins can also be great treats for eating.  I read that Jack Be Little is actually an old, revived squash plant.