During my lifetime, I have lived and gardened in several parts of the country, and in almost every place I have lived, I have been forced to amend my garden’s soil. I am currently gardening in the Ozark Mountains, where most of the earth is covered by bedrock. In Mississippi, my soil was hard, red clay, and that soil was more suitable for making clay pots than for gardening. In New Jersey, I lived on the New Jersey coast, and the soil there was too sandy.

In New Jersey, my garden was also compromised by the severe shifts of its elevation. Although it was a slow process, I began leveling my New Jersey garden via a process of creating new soil from composted newspaper, grass clippings, and leaves. Because grass and weed control were also problems, I began by covering my entire backyard with several layers of newspaper. On recycling day, I would raid the trash for an immense amount of newspaper.  At the back property lines, I stacked newspaper at least 2 feet high, and this barrier became almost as strong as a concrete retaining wall.  Then I began filling the yard by varying layers of grass clippings, compost, and dry leaves.

In the above photo, you see an amended layer after one year of decomposition. Slowly, that area became a nutritious patch of amended soil.

In my current mountain garden, I use cardboard beneath the amending and/or added soil. Although I do have soil in my garden, I also have an infestation of creeping Charlie–an invasive weed. The cardboard helps control that and other weeds.

I purchase bags of soil that is already enriched with fertilizer for my current garden, and I add at least 4″ of this enriched soil on top of the cardboard. Earthworms love newspaper and cardboard, and as the worms nibble through either of those substances, they continuously till and aerate the soil. Earthworms are gardeners’ friends.  I can’t say that an earthworm can crack rocks, but in Mississippi, I relied upon earthworms to break down my red clay. Earthworms are essential for good gardening–especially for organic gardening.  Their castings provide natural fertilizer, and gardens rich with earthworms also have fewer problems with garden pests.  I still compost my fruits, vegetables,  and newspapers doe my current garden, too, but because I live in a walnut grove, I can no longer compost the leaves that fall in my yard. Almost every garden plant is allergic to the juglone that is produced by walnut trees. 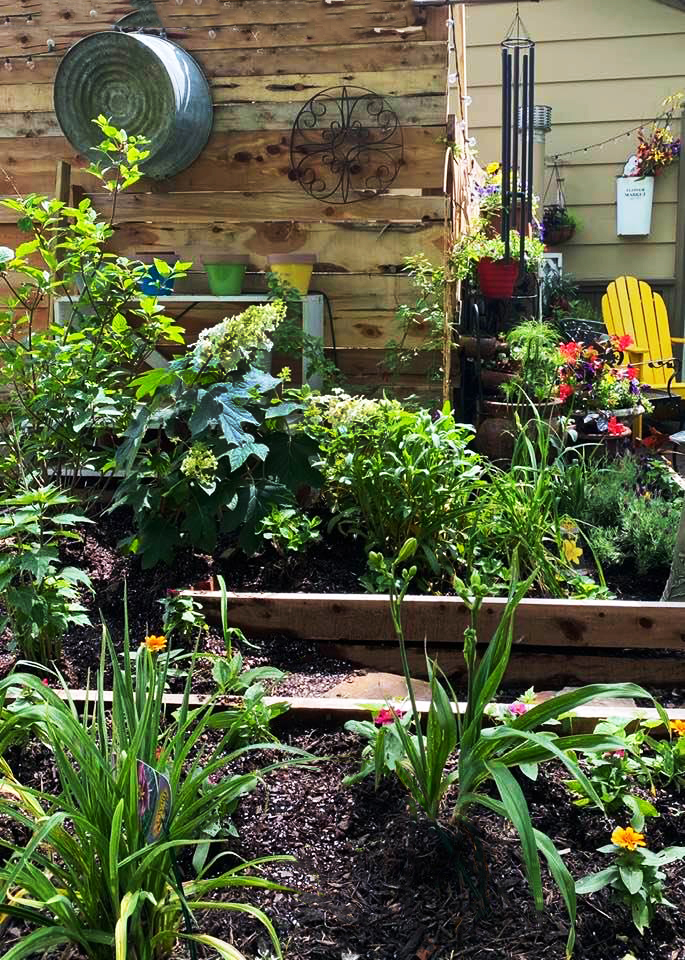 I am creating my second mountain garden. I built raised beds for both gardens. 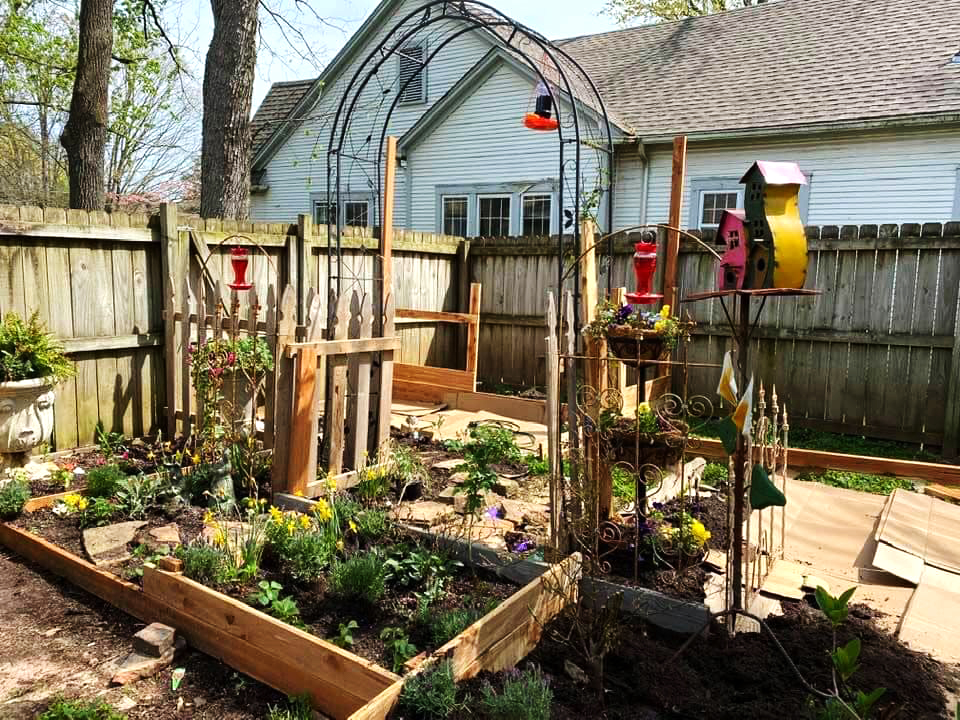 It became a seasonal routine for me.  During the first summer, I covered my yard with several sheets of newspaper.

I began by constructing frames of cedar lumber, and I covered the bottom of those frames with cardboard. To speed the process along, I bought bags of amended and fertilized soil to top the cardboard.  The photo above was taken in April of 2021. The photo below was taken in August of 2021. 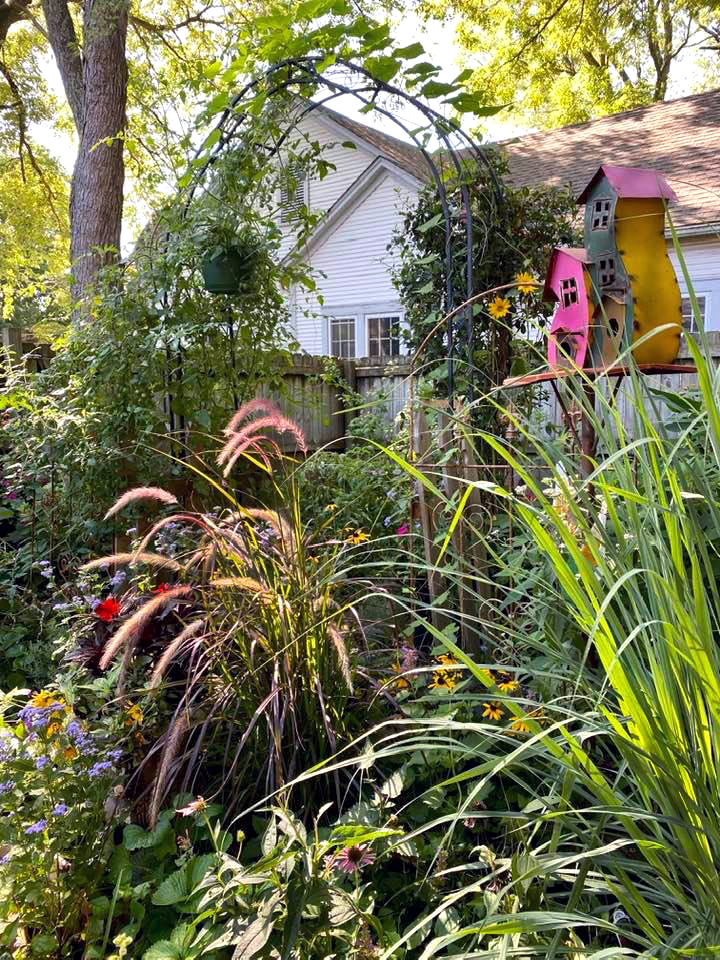 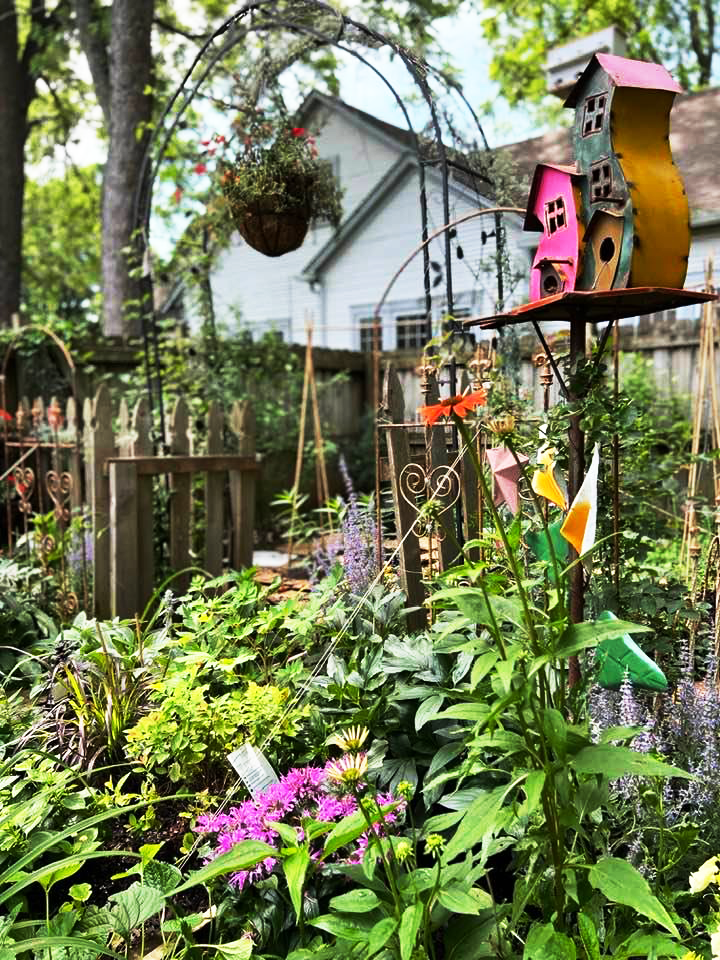 My current garden is about a year old now, and I am pleased to say that the garden area that I began last year is flourishing now. The area around the meal birdhouse is filled with a variety of herbs and perennials, and something different is blooming there each week or two. In the above photo, you see purple monarda or bee balm, blue Russian Sage, and orange coneflower Sombrero Flamenco.

In the Beginning, A Garden Is Pre-Determined by Its Soil: How to Amend and Compost for New Soil

Previous Post
What Is A Kitchen Garden or Potager?