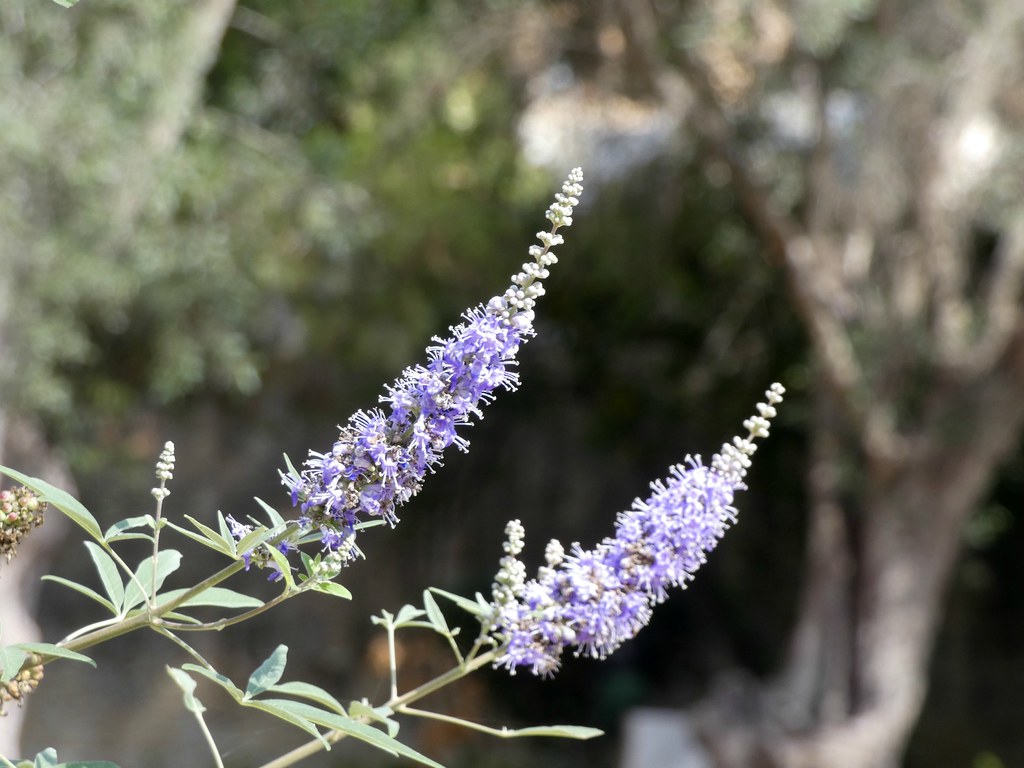 Why Is the Vitex Called a Chaste Tree?

Among other things, Pliny the Elder was a naturalist during the time of the ancient Roman Empire [23-70 AD], and he reported that the vitex was named a chaste tree because of its ability in the are of chastity.

“AGNUS CASTUS.—The “Chaste Tree” (Vitex Agnus Castus), a species of Willow, derives its name from the Greek hagnos, and Latin castus, both meaning chaste. The name was given to it, according to Pliny, from the custom of the Athenian matrons to strew their beds with it during the festival of the Thesmophora, held in honour of Ceres, when the strictest chastity was enjoined. At the same festival young girls adorned themselves with blossoms of the shrub and slept on its leaves in order to guard their innocence and purity.——Agnus Castus was consecrated to Æsculapius, and also, in the isle of Samos, to Juno. Prometheus was crowned with it. At Grecian weddings, the bride and groom carried crowns of it. It was also employed as a preservative against poisoning.——The seed of this shrub in later years acquired the name of Piper Monachorum, and in explanation it is said that, following the example of the matrons of Athens, who had discovered that the odour of branches of Agnus Castus combatted unchaste thoughts and desires, certain Christian monks made themselves girdles of the flexible boughs of the tree, by wearing which they professed to expel from their hearts all passions that love could excite.——Some of the old herbalists affirm that the seeds of Agnus Castus had a very powerful effect in arresting generation. Gerarde says “Agnus Castus is a singular medicine and remedy for such as would willingly live chaste, for it withstandeth all uncleanness or desire to the flesh, consuming and drying up the seed of generation, in what sort soever it bee taken, whether in pouder onely, or the decoction drunke, or whether the leaves be carried about the body; for which cause it was called castus, that is to say, chaste, cleane, and pure.” The leaves, burnt or strewn about, were reputed to drive away serpents; and, according to Dioscorides, a branch of the shrub, carried in the hand, would keep wayfarers from weariness.——Agnus Castus is held to be under the dominion of Mars in Capricorn.” Richard Folkard, Plant Lore, Legends, and Lyrics. Embracing the Myths, Traditions, Superstitions, and Folklore of the Plant Kingdom, published in 1884

Theophrastus, who lived from c. 371 – c. 287 BC and who was a student of Aristotle is said to have mentioned the Chaste Tree several times in his work: Enquiry Into Plants.

Other Names for the Vitex or Chaste Tree

Wikipedia adds that Pliny the Elder named the flowering shrub Vitex because of its use in Basketry. “Vitex, its name in Pliny the Elder, is derived from the Latin vieo, meaning to weave or to tie up, a reference to the use of Vitex agnus-castus in basketry.” Wikipedia

Probably because it can be woven like willow, some say that Vitex is in the willow family, but I can not verify that theory. 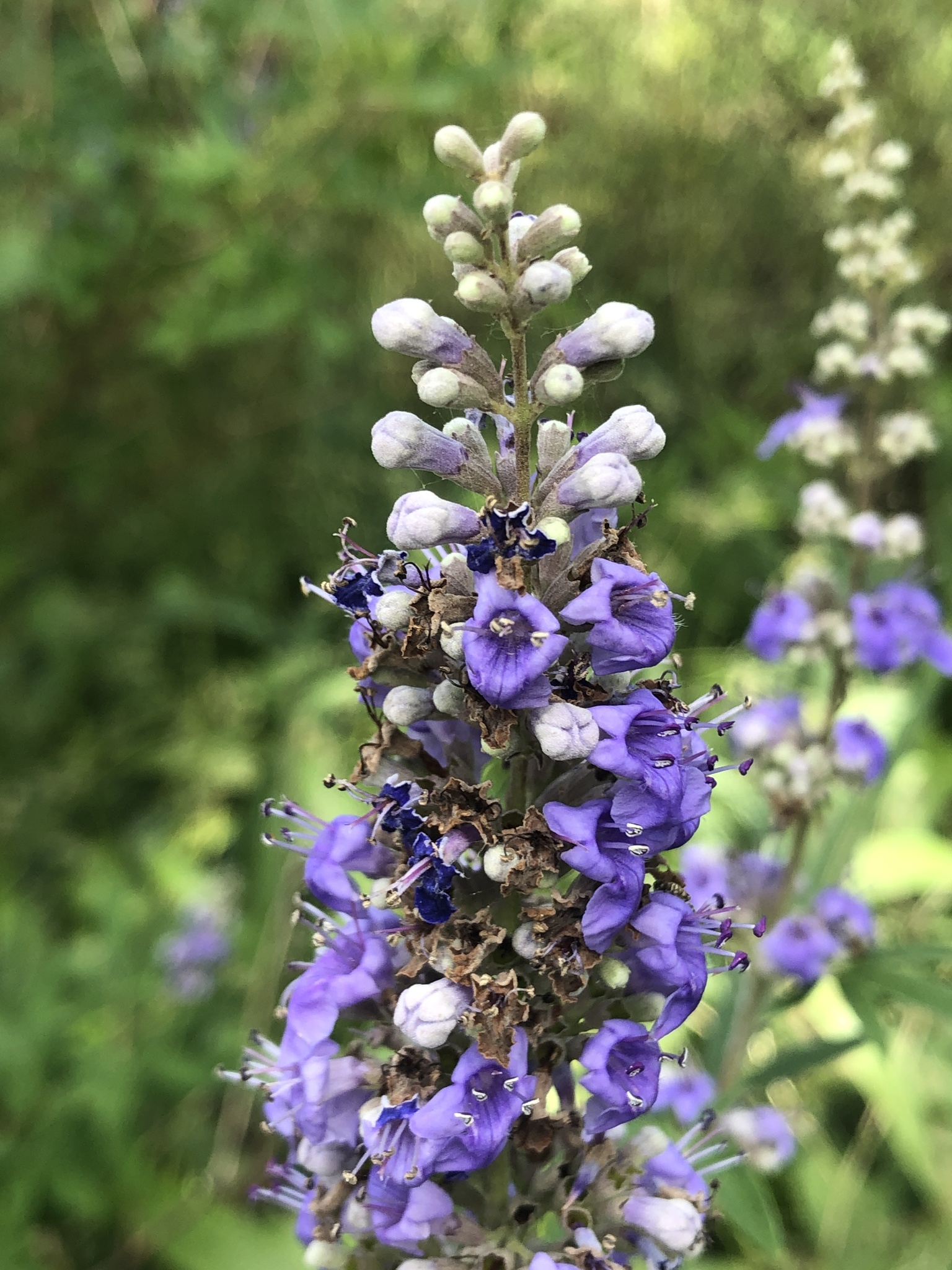 Varieties and Colors of the Vitex or Chaste Tree

I have never seen vitex trees in any colors other than that of blue and/or lavender blue, and that is probably my favorite garden color, but there are several other varieties of vitex and several colors, too.

“Smaller cultivars for potting include Blue Diddley (grows to 6 feet) and Blue Puffball (grows to 3 feet).” The Spruce 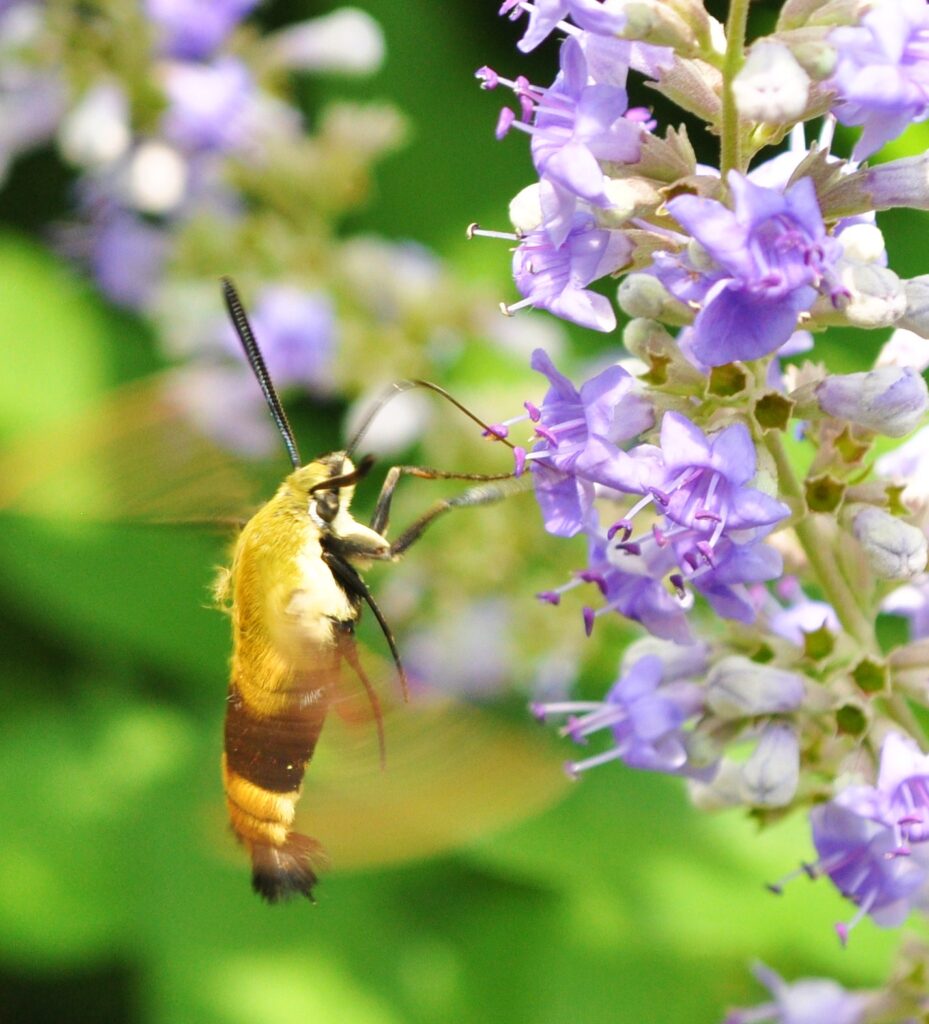 Vitex or Chaste Tree Is A Pollinator

Vitex or Chaste Tree attracts butterflies, bees, and other nectar-loving creatures, and for that reason, it is one of the pollinators.

The Chaste Tree – Vitex – Like A Huge Butterfly Bush