Daylilies arrive just in time to hide the foliage of the iris that have completed their bloom cycle.  In the above photo, the iris foliage is the dark bluish green in my garden that day.

For may years, I was a daylily snob.  If it didn’t have a common name with at least 3 words [2 of them first name combos–something like Mary Margaret Anderson]; and if it did not come from a garden store, I shunned it.  I bought the pedigreed daylilies, planted them, and watched them perform with moderate success.  Meanwhile, the orange, almost wild, common daylilies that simply happened–that simply planted themselves fared beautifully.  A couple of years ago, I decided to just let those unpedigreed orange savages go; and this year, my early summer garden is a bright orange spectacle.  I have realized that although they are long and leggy, my old, country orange daylilies deserve a bit more respect.  I decided to do some research on them and found Ray Allen’s article to be quite informative.

Daylilies, the Most Popular Perennials of Them All

My First Misconception Was That the Old Orange Daylily Was A Native Wildflower for America:

“In the United States and Canada, it all started with the original “wild” orange daylily. In fact, many North Americans think the tough old orange one they see in old gardens and along roadsides is a native wildflower, but it really isn’t. No daylily is native to North America; most hail from Asia. But that old orange Asian species, called Hemerocallis fulva, is still popular, and it’s everywhere. In fact, in its homeland, China and Korea, it’s more than just another pretty flower; the buds have been roasted and eaten as part of the Asian diet for centuries. …

“Westward Ho! This old plant arrived on our shores early during the colonial period, and it was so popular, and “passed along” from so many gardeners to their neighbors, it now grows happily from coast to coast, often along roadsides. And how did it get to the far west? Simple. When the wagon trains went west, the old orange daylily rode along. Many a frontier gardener brought his or her daylily roots along from “back East.” The botanical histories say big clumps of old daylily roots were simply tossed on the backs of the wagons, and made the journey along with the families. That’s how tough and durable daylily roots can be.”

The larger flowers are true lilies.  The smaller flowers, i.e. the one in the front, are old, orange daylilies

Don’t confuse Daylilies with the true lilies: Daylilies are not really “lilies.” In fact, they are quite different. As you know, true lilies grow on tall stems with flowers at the top. Daylily flower stems (called “scapes”) are generally much shorter, and grow from a fountain of grass-like foliage at ground level.

Note the grass-like foliage of the daylily.

By the way, even though the old reliable daylily is orange, don’t call them “Tiger Lilies.” That’s the common name of an equally famous, old species lily—a tall true lily that is orange with black spots. No daylily is a Tiger Lily. 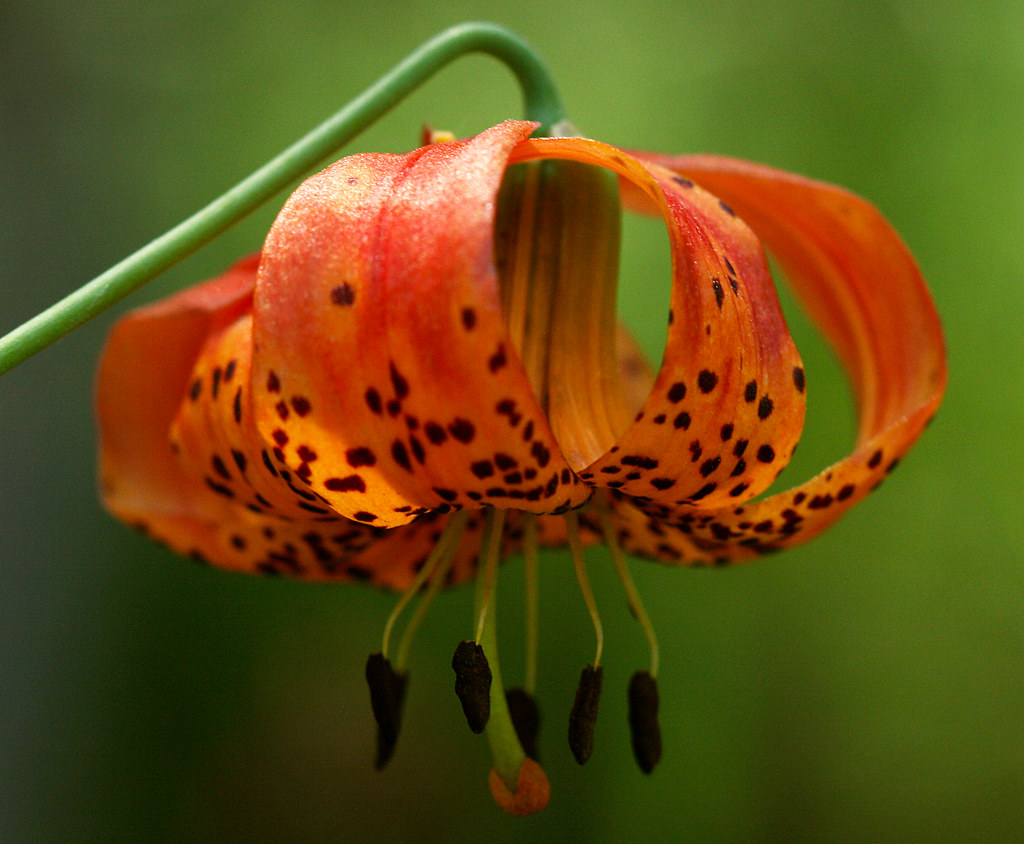 Daylilies are members of the genus, Hemerocallis, not Lilium, which is the genus name of true lilies. Hemerocallis is a combination of two Greek words meaning “day” and “beautiful.” This tells you the flowers last only one day and are beautiful. Few people realize the flowers fade so quickly, because as one fades, the next one on the stalk (or “scape”) opens, keeping a planting of daylilies in bloom for weeks, sometimes for months.”

Daylily roots — not bulbs: As all good gardeners know, daylilies don’t grow from bulbs like true lilies and other famous bulb flowers like daffodils and tulips. Rather than one onion-like bulb, Daylilies form a mass of thickened, fleshy roots. These unique root systems hold so much moisture and nutrients, the plants can survive out of the ground for weeks, as our wagon train ancestors learned. This survival system, making them tough, and really easy to handle, is one of the reasons they’re so popular today. They’re also dependably hardy, so once you have them, you have them for years.

Easy, easy, easy to grow! Everybody loves Daylilies because there’s really no other perennial that adds more color with less work. They stay low, they grow almost anywhere with sun or some shade, they always bloom, and their fountain of foliage shades out any weeds close by. The only work involved may be dividing them every five years or so when the clumps become so leafy it inhibits the bloom. But many gardeners don’t even do that. Of course, they respond to regular watering, careful preparation of great soil, careful division as needed, and proper doses of fertilizer. So if you’re a meticulous gardener, you can make them shine like no other group. But if you ignore them, they’ll bloom well for you, too.”

Let’s Hear it for the Old-Fashioned, Almost Wild Daylilies