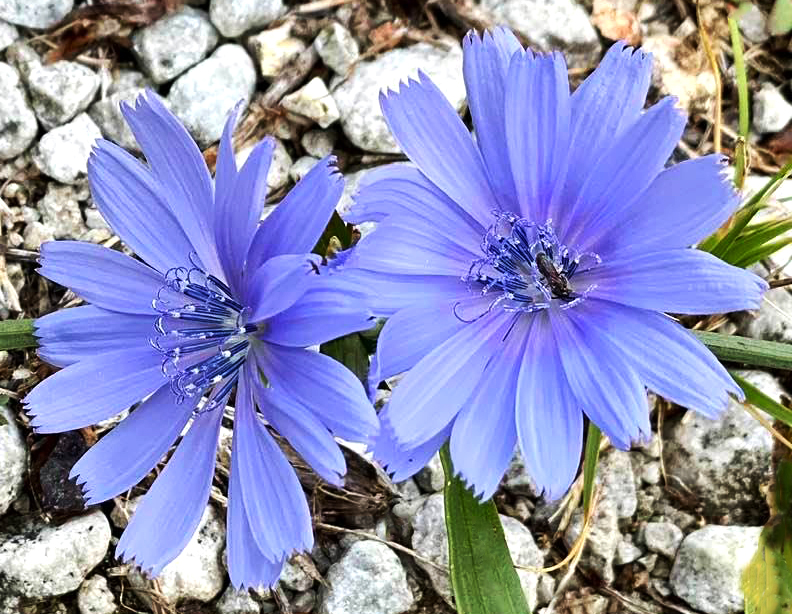 Early during the summer, I noticed that a glorious daisy-like flower had begun to grow wild in the middle of my gravel driveway. After several examinations of the plant, I realized that the plant was chicory, and my mind raced to the French Quarter in New Orleans, where I had learned to love chicory coffee along with beignets at the Cafè du Monde. 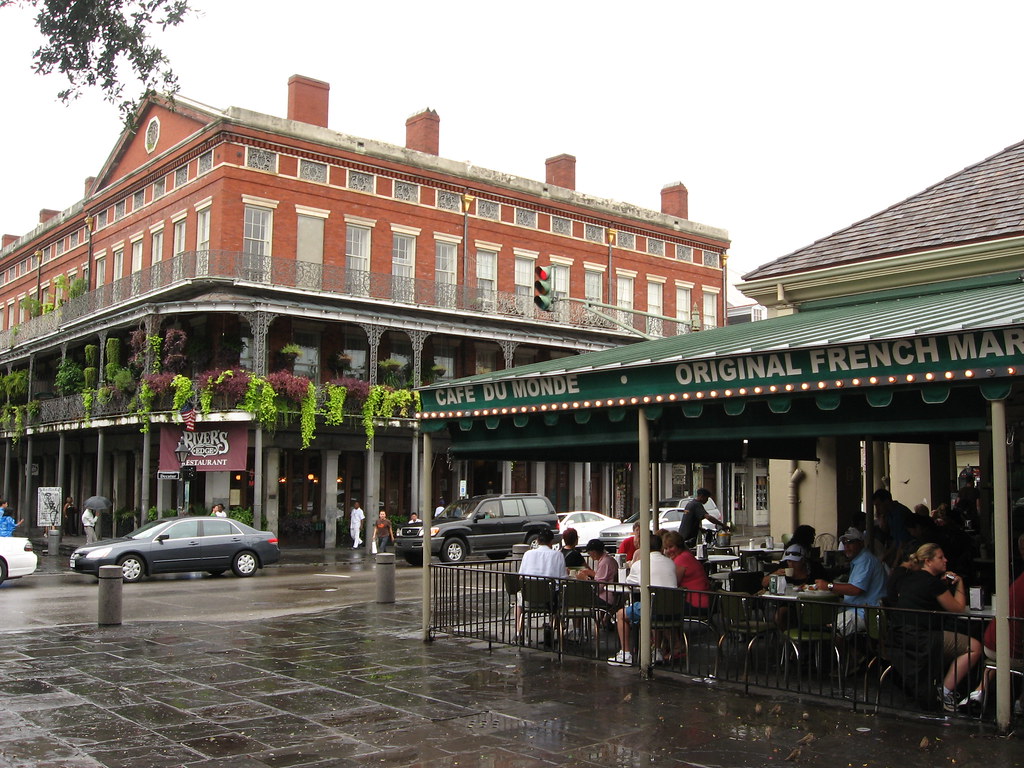 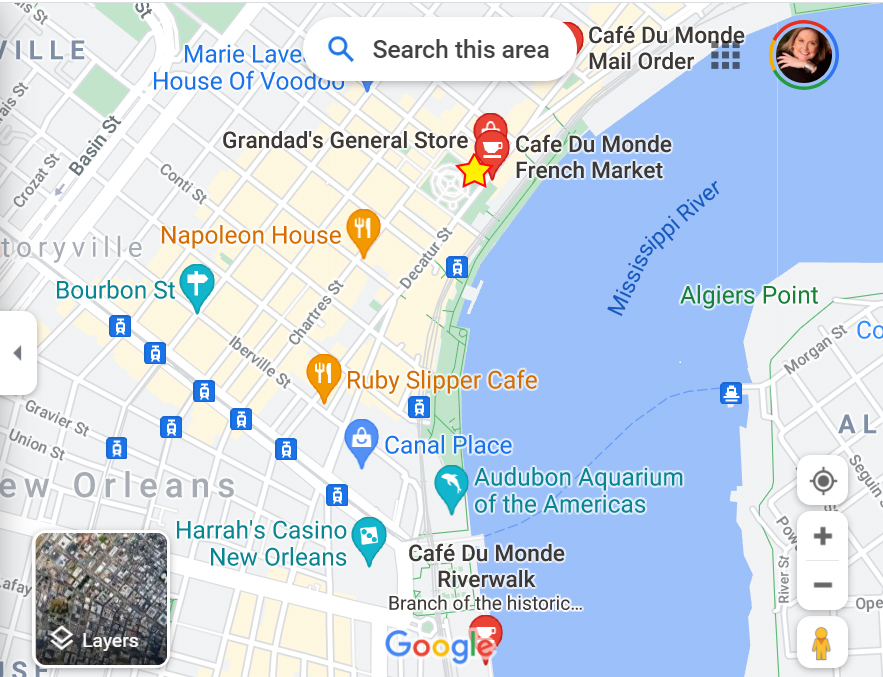 The Cafè du Monde is in the French Quarter of New Orleans and about as close to the Mississippi River as you can get. On the above map, you see its location marked by the star in the upper section–on the outer edge of the mainland and just across the river from Algiers Point. Honestly, almost anything tastes good in New Orleans, and I may not have liked chicory coffee anywhere else. But there, in the old part of New Orleans, in the Vieux Carré, or the old square, loaded with lots of sugar and plenty of fresh cream, chicory coffee is an invigorating treat. 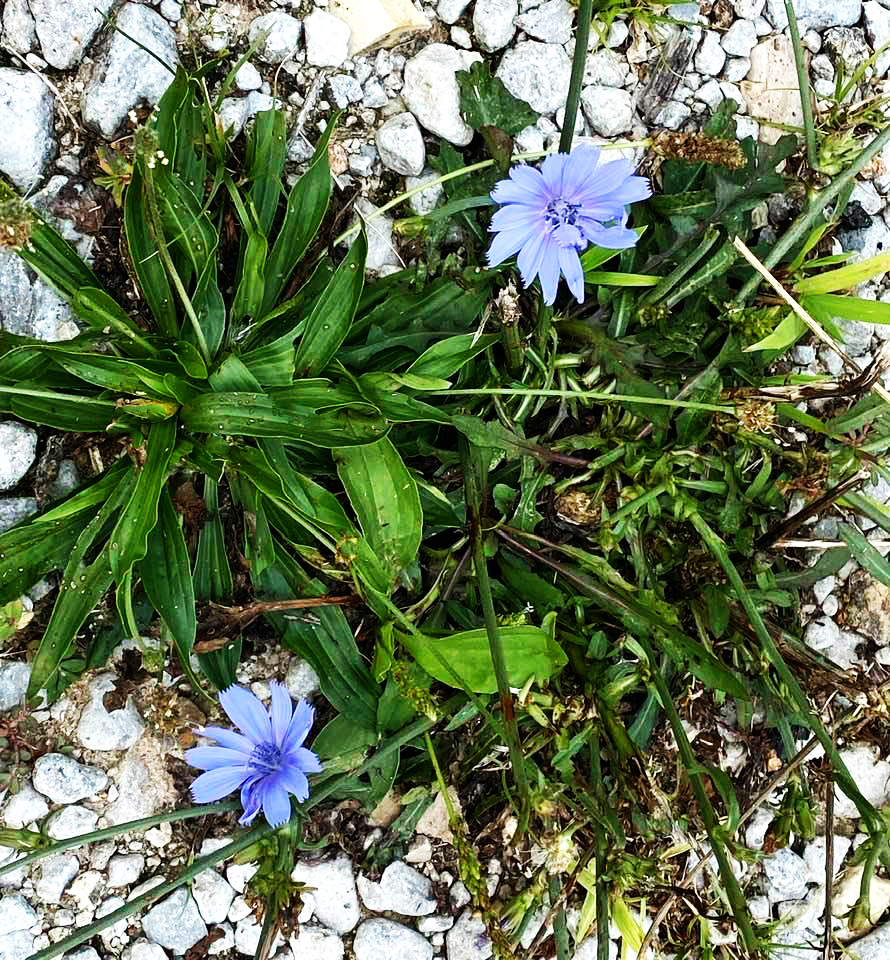 I am an avid gardener, and I have moved tons of enriched garden soil into my garden. But I was perplexed that my chicory plant had NOT chosen to sprout himself in one of my nice beds, ad in researching chicory, I discovered that my chicory had elected a spot at my house that was perfect for him–my gravel driveway. On the site roastycoffee.com, I read the following:

“Chicory is a perennial plant that you’ll find growing in gravel lots, beside the road, or in poorly cultivated fields across most of the US and Canada.”

Because I’d like to grow a large plot of chicory, I would have preferred that my little plant had sprouted somewhere else in my yard. I wanted to transplant the little guy somewhere that I could better monitor its growth and hopefully propagate it, and I tried to dig the soil around it. But no luck. I live in the rocky Ozark Mountains, and I discovered that my chicory plant has somehow climbed to the top of a patch of bedrock. There would be no digging that plant out at all. I have difficulty understanding how this fellow is growing at all.

The chicory bloom reminds me of a bachelor button, which is one of my favorite annuals. I don’t see bachelor button plants in nurseries anymore, and it is an annual–meaning that it only grows one season.

One of the beautiful things about the chicory plant is that it is perennial, meaning that it will return year after year. I can honestly say that I want to grow a plot of chicory for several reasons: 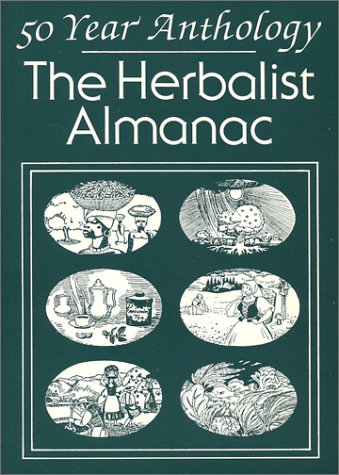 In The Herbalist Almanac, the following is said about chicory:

“It would surprise many farmers to know that this weed, so common in barnyards and along waysides was a highly regarded medicine of the ancient Egyptians and Arabian physicians. The plant was very common over most of Europe before America was discovered, and is still much used by people of modern times. The blanched leaves are used in salads–the baked roots as pottage, and the pulverized dried roots made into flour for bread. The roasted roots of chicory was used to give body to coffee, or as a coffee substitute. Roasted chicory imparts a rich flavor and smoothness, when mixed with coffee.” page 154.

Clarence Meyer collected the information in the Herbalist Almanac, and he also compiled and wrote the book Old Ways Rediscovered.

In the latter book, he said the following about making chicory coffee:y

CHICORY ROASTED
“At one time, this was a disreputable adulterant in coffee: however, by skillful roasting methods it has become an esteemed ingredient in New Orleans type coffees. Roasted chicory now deserves a niche of its own as a flavor in the culinary world. For a delightful and wholesome difference, heat (not boil) 1 cup of milk, a teaspoon or more, if desired, roasted chicory: steep 5 or 10 minutes. Strain off botanical; sweeten to taste. The flavor of this beverage is very much like a milk chocolate.
This beverage leaves no caffeine jitters, and contains no theobromine (as in cocoas) that sometimes causes digestive disturbance.” page 80.

Chicory has no caffeine, and for people who need to cut down on caffeine, substituting all or part of coffee for chicory be a medicinal value for some, but it has other medicinal qualities, too.

WebMD says that chicory is a significant source of inulin, which is medicinal:

“Inulin is a starchy substance found in a wide variety of fruits, vegetables, and herbs, including wheat, onions, bananas, leeks, artichokes, and asparagus. The inulin that is used for medicine is most commonly obtained by soaking chicory roots in hot water.

“Inulin is commonly used by mouth for high blood fats, including cholesterol and triglycerides. It is also used for weight loss, constipation, diarrhea, and diabetes.”

Depending upon the source you consider, chicory might be used to relieve arthritis, too, but I would not be able to substantiate any of the medicinal claims. Yet, the fact that the plant has been used as medicine for centuries is worthy of consideration. It was valued for its medicinal properties before it was discovered to also be good as a beverage.

The Coffee Wiki offers a quick history of where and when chicory began to be used as a beverage:

“Chicory was first roasted and used in coffee in Holland around the year 1750[1]. In a short period of time, it became a popular replacement for coffee. By 1785, James Bowdoin, the governor of Massachusetts had first introduced it to the United States[2]. In 1806, Napoleon attempted to make France completely self-sufficient. To eliminate coffee imports, chicory was used as a complete substitute. While this system did not last more than a few years, the French continued to use chicory to blend with their coffee. This practice would migrate to the still French-influenced New Orleans and is still considered the normal New Orleans-style of coffee[3].

“By the late 19th century, chicory had become not just a popular substitute, but also a common adulterant, with many coffee companies including a significant amount of the lower costing chicory in products advertised as coffee. The practice of deceptively cutting coffee with chicory became so common that the New York Times opined that pure coffee could no longer be found.”

This history is not conclusive. Other parts of the world also have traditions of drinking chicory coffee, but ] Napoleonic France was a primary contributor to the development of New Orleans, and no doubt, along with the Napoleonic French came the drinking of chicory coffee. Yet, chicory’s ancestry also includes Africa. Chicory ay have also come to New Orleans by way of the slaves and by way of the Haitian population. Whatever the case, chicory and New Orleans are linked, and they are especially linked for me, a Southerner for whom New Orleans is a permanent state of mind. 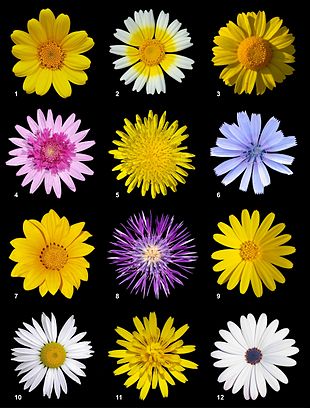 Similar to the dandelion, chicory has a long taproot. It also grows in a bunch, in much the same way as a dandelion. I have learned that chicory and dandelions are related and that chicory is a type of endive. It is also in the same family as asters, daisies, etc., [Asteraceae], and chicory actually looks much like asters. Aster means star.