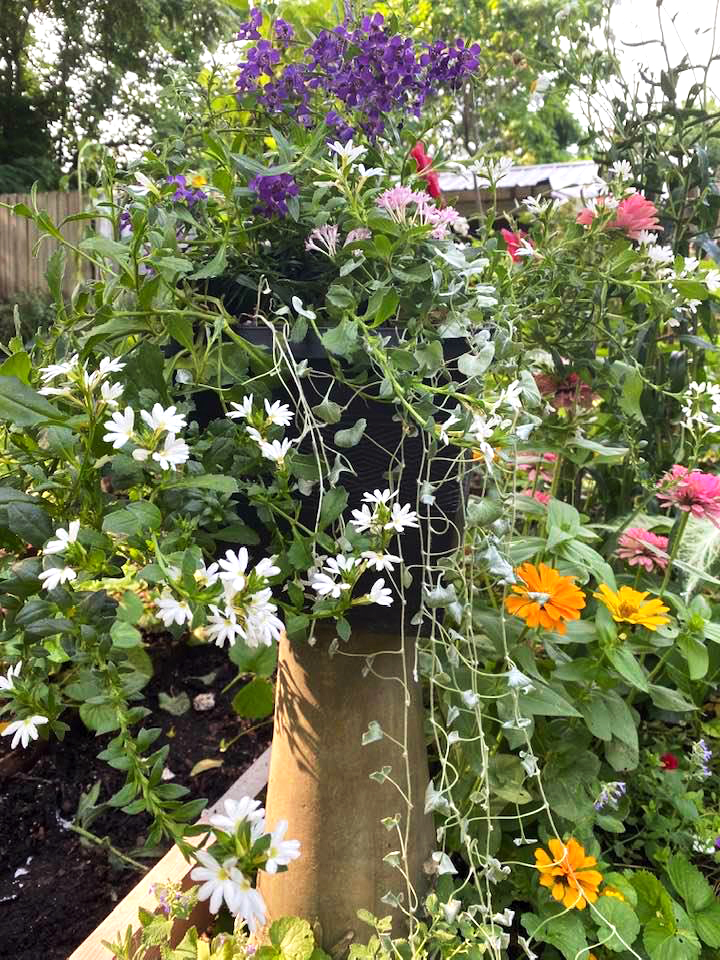 Before this year, I never grew annuals, other than impatiens, zinnias, sunflowers, and lantana. But this year, I have bought several container plantings, such as this one which  has purple Angelonia, pink Penta, white Scaevola Fan Flower, and the dainty and dangling Dichondra Silver Falls. 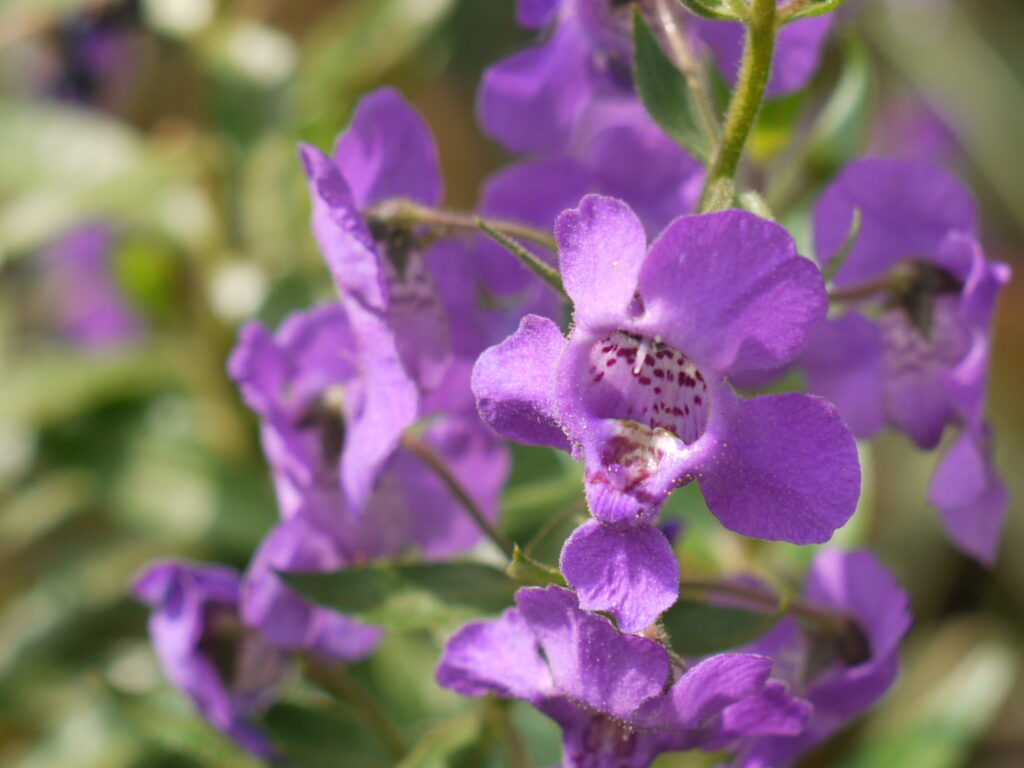 In planting zones 10 and 11, Angelonia Augustifolia could be grown as a perennial, but I live in planting zone 7a, and in my area, this gorgeous flower is an annual. My container planting only uses purple angelonia, but this plant comes in other hues, too. The plant grows to a height of about 12″ to 18″ tall. The Missouri Botanical Garden says the following about this plant:

“Angelonia angustifolia, commonly called angelonia or summer snapdragon, is native to Mexico and the West Indies. It is an upright, glabrous, somewhat bushy, tropical perennial that is noted for its long summer bloom of small snapdragon-like flowers. Plants typically grow 12-18” tall. Stems are clad with narrow, oblong to lanceolate, green leaves (to 3” long) with toothed margins. Foliage is slightly aromatic. Bluish-purple flowers (each to 3/4” across) bloom from late spring to early fall in narrow terminal spikes (to 8” long). The two-lipped flowers are somewhat reminiscent of snapdragon. Cultivars are available in white, blue, light pink and bicolor flower colors.” 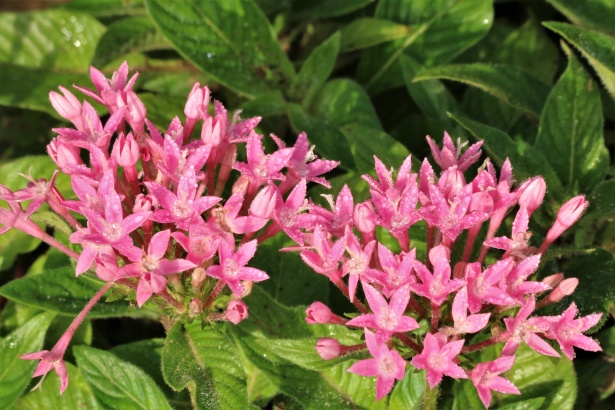 Pentas come in several colors, and they are also annuals where I live. Missouri Botanical Gardens says the following about Pentas:

“Winter hardy to USDA Zones 10-11 where it is easily grown in average, medium, well-drained soils in full sun. Tolerates part shade, but best flowering in full sun. Best in organically rich, fertile soils. In St. Louis, grow in the ground as bedding annuals that are replaced in the garden each spring or in pots/containers as frost-tender perennials that are overwintered indoors. May be easily grown from seed started indoors in late winter approximately 8-10 weeks before last frost date. During the growing season, water regularly (allow soils to dry somewhat between waterings) and feed monthly. To overwinter, bring pots/containers inside before first frost to a bright, cool (59-50°F) location and reduce watering. Cuttings may also be taken from favorite plants in late summer for overwintering. Also may be grown as a houseplant in a sunny room with high humidity.

“Pentas lanceolata, commonly called Egyptian star cluster or star flower, is native from Yemen to East Africa. It is a tropical woody-based perennial or subshrub that grows 3-6’ tall in its native habitat, but more typically to 1-2’ tall in beds or containers in the St. Louis area. It is a many-branched, somewhat sprawling plant that features 4” wide rounded clusters (corymbs) of star-shaped flowers over a long summer to frost bloom. Elliptic to lanceolate dark green leaves (to 6” long). Flowers are pink, magenta, lilac or less commonly white.

“Genus name comes from the Greek word pentas meaning a series of five with reference to the flower parts being in fives instead of fours as in related genera.” 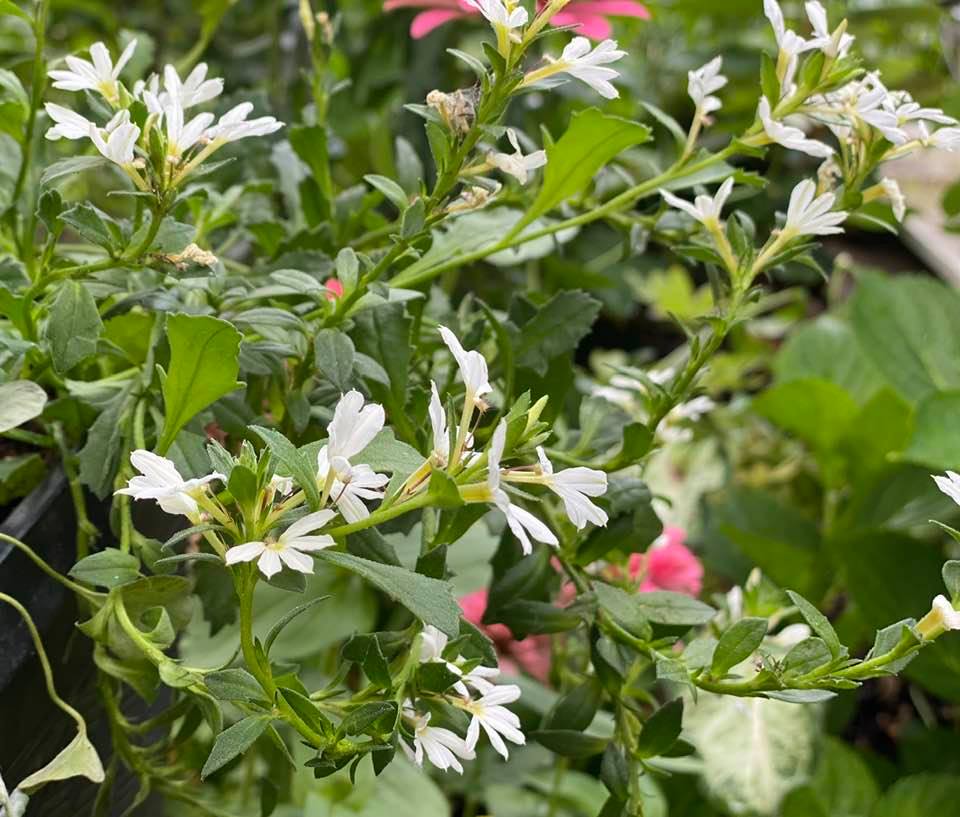 Scaevola is another plant that is hardy only in zones 10 and 11, It is a light and airy plant that gives a planting a fairy-like appearance.

Dichondra Silver Falls in Perennial in Zones 8 – 10, but in my area, this delicate and dainty vine is annual. Wisconsin Horticulture says the following about this plant:

“Silver Falls’ dichondra is a vigorous plant that forms a mass of soft pewter leaves on silver stems in full sun to part shade. The fan-shaped, shimmering silvery leaves are held on plants just 2 inches tall. The trailing stems branch well without pinching. It is heat and drought tolerant and will recover quickly if watered after wilting. In the Midwest, dichondra has no serious insect or disease problems.

“‘Silver Falls’ dichondra is great alone or in mixed containers, providing a cool contrast to green foliage and brightly colored flowers. Try it in hanging baskets, tall containers, or window boxes as an alternative to licorice plant (Helichrysum petiolare minus ‘Silver Mist’). It combines well with ‘Tidal Wave’ petunia, ‘Angel Mist’ angelonia, or ‘Dragon Wing Red’ begonia. Like other silver plants, it goes well with purple, pink or blue flowers and foliage. For a sophisticated look, plant it with white, pale pink and pale lavender flowers. Other suggested plant combinations include Persian Shield (Strobilanthes dyerianus) and ‘Duckfoot’ coleus; petunias, ivy geranium and lobelia; or an all-foliage mix with chartreuse and black sweet potato vines. Planted near the edge of a raised bed or rock wall, it will cascade over the edge, growing 2 to 4 feet long. It can also be used as a ground cover on well-drained soils where it will form dense mats that choke out weeds. Try pairing it with colorful foliage plants, such as ‘Purple Knight’ alternanthera or sun-tolerant coleus. ‘Silver Falls’ can even be used as a trailing filler for cutflower arrangements.

“Dichondra can be purchased as bedding plants or started from seed.”