Today was a cooler day, and I spent some time weeding my garden. While I was outside, I lifted my head and noticed that the rattling song of the creatures that one of my sons calls the “heat bugs” had begun. When I came inside, I noticed that I had picked up a bouquet of beggar’s lice outside. They had attached themselves all over my clothes. Immediately, my mind drifted back to this time of year in my childhood, a time in the 1950’s when most kids in the Bootheel of Missouri began to prepare themselves for Cotton “Vacation.” Cotton Vacation was a no-fun time when school was dismissed for several weeks so that humans [including the kids] could pick the cotton that had grown in the fields all around our communities.

My purpose is not to discuss cotton or cotton vacation, however. Rather, I want to discuss something else that I remembered today from the hot summers of my childhood. Today, I vividly recalled the many times that I have heard my dad say: “Thank goodness for the crape myrtles. They are the only plants who have the gumption to continue blooming after the sun has gotten so blasted hot that you could fry an egg on your sidewalk.”

Late last fall, I set two Pecos crape myrtles out in my garden, but they have hardly grown, and they certainly have not bloomed yet. There is hardly any dirt at all in the rocky terrain where I live, and I know that the problem is that I didn’t plant my baby crape myrtles in enough dirt. When fall returns, I’ll move my Pecos crape myrtles to a place that has a great deal more soil. 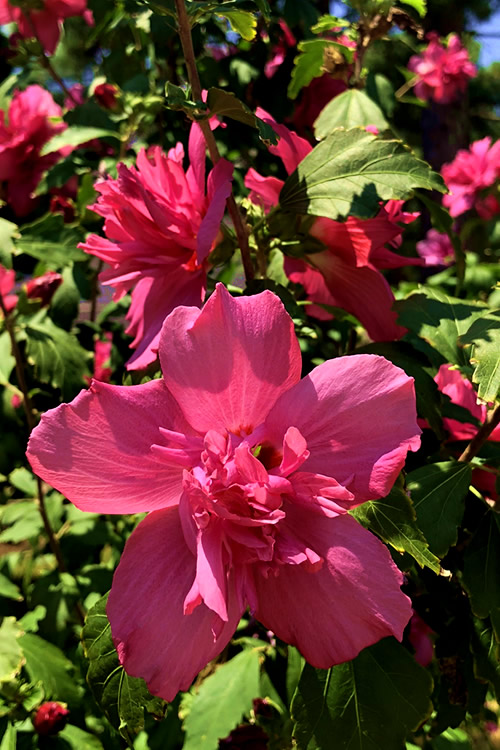 Lucy Rose of Sharon or Althea

This past spring, however, I planted a Lucy Rose of Sharon, and it has grown from its start as hardly more than a half-foot-long twig to a promising young bush that is about 4′ tall and 3′ wide. It has begun to bud now, and I anticipate that I’ll see some gorgeous deep pink althea blossoms sometime in August.

At this time in late July, my Indian Summer hollyhocks have surrendered to the heat and to Japanese Beetles. There is little more left where they stood than the lacy deadness of mostly eaten leaves that still spike in my garden, giving it the presence of a giant spider web..

But my Black-Eyed Susans and Forget-Me-Nots are flourishing in my end-of-July garden. Yet, those are short flowers that grow close to the earth.

For the tall spots of color in my July garden, I depend on my blooming miniature pumpkin plants to grow high upon my arbors and trellises and to allow the goldenness of their blooms to add sunny summer splashes all around.

Several years ago, I tossed my Halloween pumpkins and gourds into an out-of-the-way spot in my garden, and the following summer, I noticed that pumpkin vines grew out of the previous autumn’s pumpkins. That is the first time that I realized how magnificent it is to watch pumpkins grow.

Just as the air becomes hot and parched and when most of the early summer blooms have faded, my pumpkin vines and blossoms move into the spaces that would otherwise have become a deathly void.

A few years ago, I found a small garden plan for growing an arbor of jack-be-little pumpkins on a tripod that had also been planted with morning glories from the Better Homes and Gardens website Here

During the spring of 2019, I planted Connecticut Field Pumpkin seeds, and those are growing on the ground of my garden, but I also planted the much smaller sugar pumpkins to climb along my rose arbors and obelisks. The above photo shows the sugar pumpkins’ growth as of July7, 2019.

By July 14. I needed to add another arbor to support the rampant growth of the vines.

The sugar pumpkins’  vinez and blooms on July 23, 2019, have continued to spread.

A pumpkin’s bloom is as beautiful of that of any orchid, but a pumpkin’s bloom is only a hint of the glorious display that is yet to come. Soon after the blossoms appear, tiny, new pumpkins will begin to form at the base of each bloom. In a matter of weeks, what was an area of golden flowers will become a network of pumpkins that will celebrate the arrival of harvest time.

Echoing the words of my dad: “Thank goodness for the crape myrtles.” I agree that they are one of the few plants that seem to thrive in the South’s oppressive heat, but I also thank God for the pumpkins. They are another plant that flowers beautifully when the heat bugs begin to rattle, and they follow their initial flowery display with a pumpkin fest at the time of harvest.