A Weed Is but an Unloved Flower –
Ella Wheeler Wilcox

When appraising nature, I am perplexed by the question, “Who decided that some plants were weeds that looked like flowers and who decided which were flowers?” 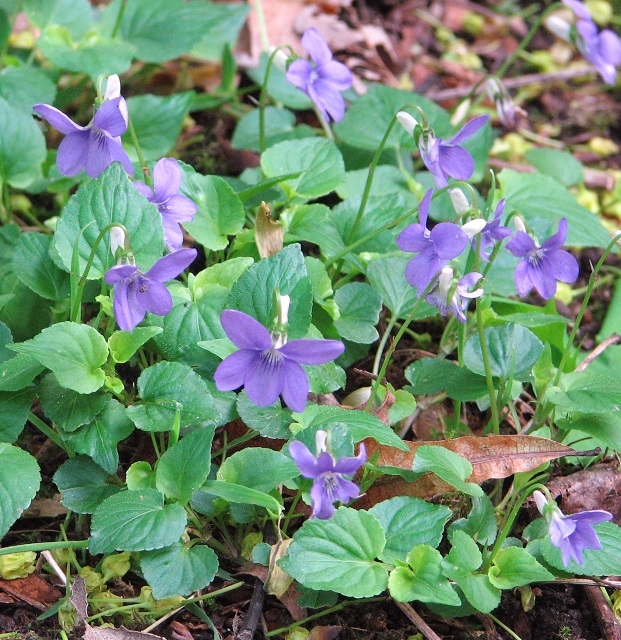 Take for instance the common violet that weaves a purple and green carpet across my lawn in spring. During the 19th century, poets sang about violets and drawings of common dog violets were sprawled across old diaries.

From Edith Holden’s Diary of An Edwardian Lady Here

“And wind-flowers and violets
Which yet join not scent to hue
Crown the pale year weak and new.” – Shelley

“Long as there’s a sun that sets Primroses will have their glory
Long as there are violets, They will have a place in story.” – Wordsworth

Once a staple of the cottage garden and something considered to be beautiful, the violet has more recently fallen from grace. In many states, the violet is considered to be a weed. That seems odd to me. The flushing of common violets in springtime exhilarates me. Again, I wonder who gets to decide what is a weed and what is a flower.

I don’t know whether dandelions were ever romanticized, but I have seen some beautiful drawings and paintings of them. And When I simply look closely at a dandelion, I don’t see anything in its form that is less beautiful than a chrysanthemum.

He saw the kind of beauty yellow flowers have growing over a carpet of dead leaves. The beauty of cracks forming a mosaic in a dry riverbed, of emerald-green algae at the base of a seawall, of a broken shard from a blue bottle. The beauty of a window smudged with tiny prints. The beauty of wild weeds. – Michelle Cuevas

Generally speaking, garden clubs are a bit too structured for me, but for a short while, I was in a garden club, and as garden clubs often do, my club sponsored a flower arranging exhibition. Every member was asked to choose a piece of art and to interpret it with flowers. I chose a painting of an old barn and I arranged Johnson Grass with a mass of Black-eyed Susans–the ones that grow in the forests and alongside roads. I would imagine that everyone would call Johnson Grass a weed, but in my arrangement that day, it became a 2nd place winner. [A garden club in the 70s could NEVER give Johnson Grass ararrangement a 1st place].

With the exercise of a little care, the nettle could be made useful; it is neglected and it becomes hurtful. It is exterminated. How many men resemble the nettle!” He added with a pause: “Remember this, my friends: there are no such things as bad plants or bad men. There are only bad cultivators. – Victor Hugo, Les Miserables

Again, what is a weed?

The strongest and most mysterious weeds often have things to teach us. – F.T. McKinstry

The discussion of what and who exactly are the weeds is a valuable one and one that will continue to intrigue me, but today I want to focus on one “weed”–the dandelion. While most will agree that it is not something that they plant in their gardens, others must agree that much good comes from the dandelion.

In his book The Cottage Garden, Christopher Lloyd said the following about making Dandelion Wine:

“While not deliberately grown in the garden, dandelions were found in abundance in the hedgerows and fields during the spring.” Lloyd, The Cottage Garden, p. 178.

He continues by offering the following recipe for making Dandelion Wine:

Place the dandelion heads in a large bowl. Add the bowling water to the flowers and leaves, covered, for two days, stirring occasionallly. Strain off the liquor and boil for fifteen minutes alond=g with the shredded lemon and orange peel (no pith). Strain and add the sugar. Allow to cool to 70° and add the yeast. Closely cover and allow to ferment for four days. Put in a jar with an air lock and leave in a warm room until fermentation ceases, then bottle.”
Lloyd, The Cottage Garden, p. 178.

“When life is not coming up roses
Look to the weeds
and find the beauty hidden within them.”
L.F. Young

“The woman loved everything that grew on God’s earth, even weeds. She knew that even the weeds were capable of doing miracles she never could.” – Emily Flim

“It’s easy to take the time to stop and smell the roses but one must be willing to give of themselves enough to also stop to admire and understand life’s weeds.” – Colleen Dougherty

“I turn and run, watching my feet trample a massacre of weeds. I mourn them. The only thing that grows is dandelions in the cracks of the sidewalk and we always end up killing them.” – Ellie Lieberman

“He saw the kind of beauty yellow flowers have growing over a carpet of dead leaves. The beauty of cracks forming a mosaic in a dry riverbed, of emerald-green algae at the base of a seawall, of a broken shard from a blue bottle. The beauty of a window smudged with tiny prints. The beauty of wild weeds.” – Michelle Cuevas

“Empowered Women 101: If they made you an option you will always be an option vs. the person they really wanted. Don’t ever settle for someone that makes you go through hell only to stay with you because they don’t have the confidence to go get what they really want. Fear will always follow your rules when they know they don’t have options that make them stay comfortable. You won’t grow real love in this type of a relationship. You will water weeds and call it a garden.” – Shannon L. Alder