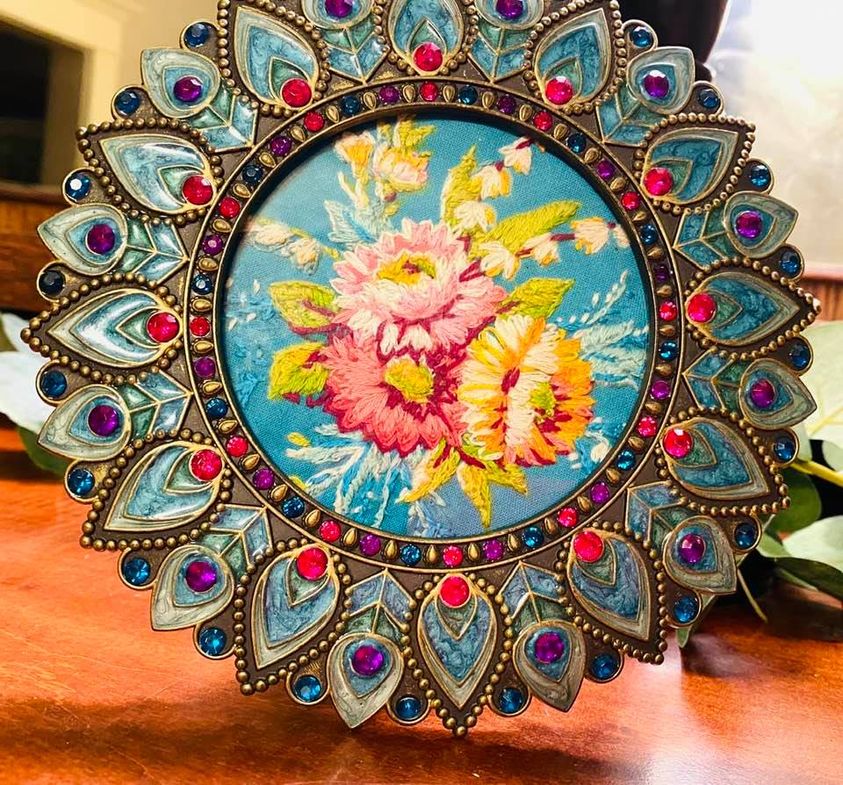 My grandmother was my role model. During the spring and summer, she grew flowers in her garden. In fact, she had the biggest flower garden in my town, and I have no difficulty saying that my grandmother’s garden was one of her art forms. But as winter set in, my grandmother would clean up her garden tools, and she would begin gardening inside–via her quilt making.

In another post, I relate that my own gardening is a way that I continue to try to connect with my grandmother, who has been gone for about 50 years.

In the above post, I share the following poem that I wrote about my feelings, as a child, after I had woven my way through her garden and ultimately to her back door. I’ve reached the shore
Of my grandmother’s door–
The one from the garden, inside.

Oh, sunny, sweet back room
Of my grandmother’s loom–

The place in the dirt
Of my grandmother’s skirt.

In your soft, summer lap,
Hold me tight, I will nap,

Memory plays a funny game with us. We often remember the good things of our pasts as much larger and grander than they actually were, and in my child’s mind, I remember my grandmother’s house as a spacious place. But her house was actually very small. Yet, she had a fairly large dining room that stood in the exact center of her house, and that dining room was lined with windows. Each winter, my grandmother would set up her quilting frame in the light from those windows, and she would quilt. Her dining room table became her cutting board, and I loved to sit beside my grandmother as she cut up old dresses and shirts and flour sacks and then set them into quilting patterns. Through that process, I learned to love the pictures that had been printed on the fabrics, and my grandmother’s fabrics became the first art gallery that I would have the opportunity to visit. I grew up in the rural South. I would not visit a real gallery until I was over 20.

Often, I would collect my grandmother’s scrap fabrics, and I would create fabric paintings or collages with them. My grandmother often had a dime store bottle of glue lying around. 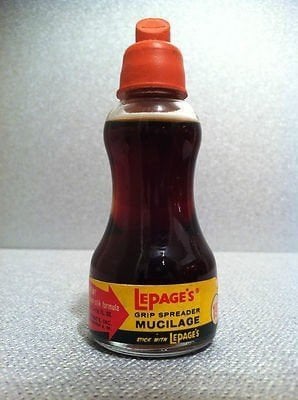 And I would attach my favorite scraps of fabric, which always had flowers on them, to pieces of butcher paper, and I’d thereby create my first paintings. I am still making those flower paintings today.

But I make flower art in more than one way. Like my grandmother did before me, I also sew it. 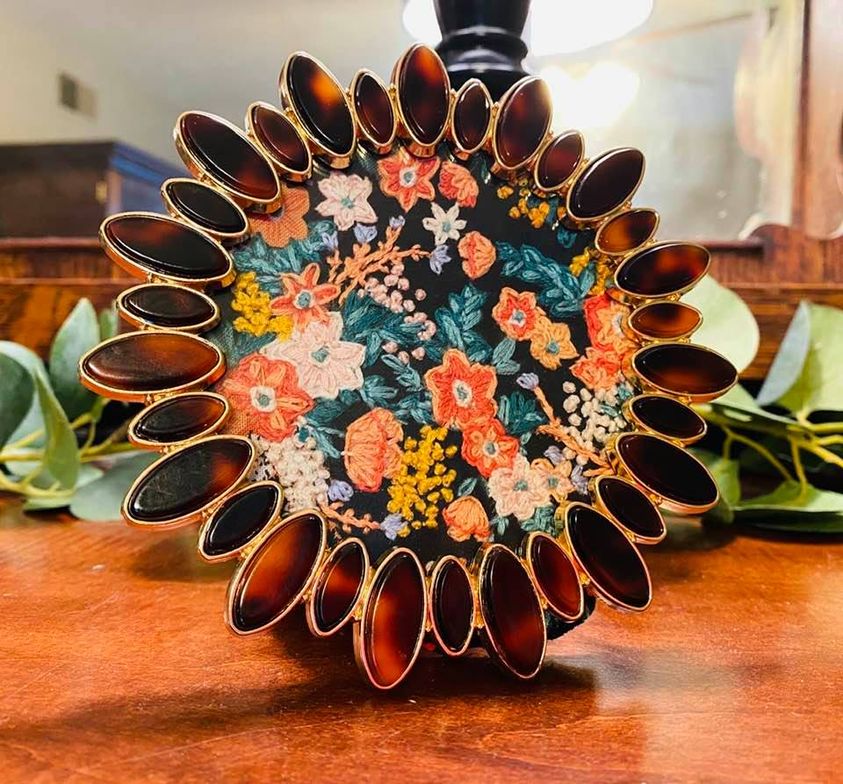 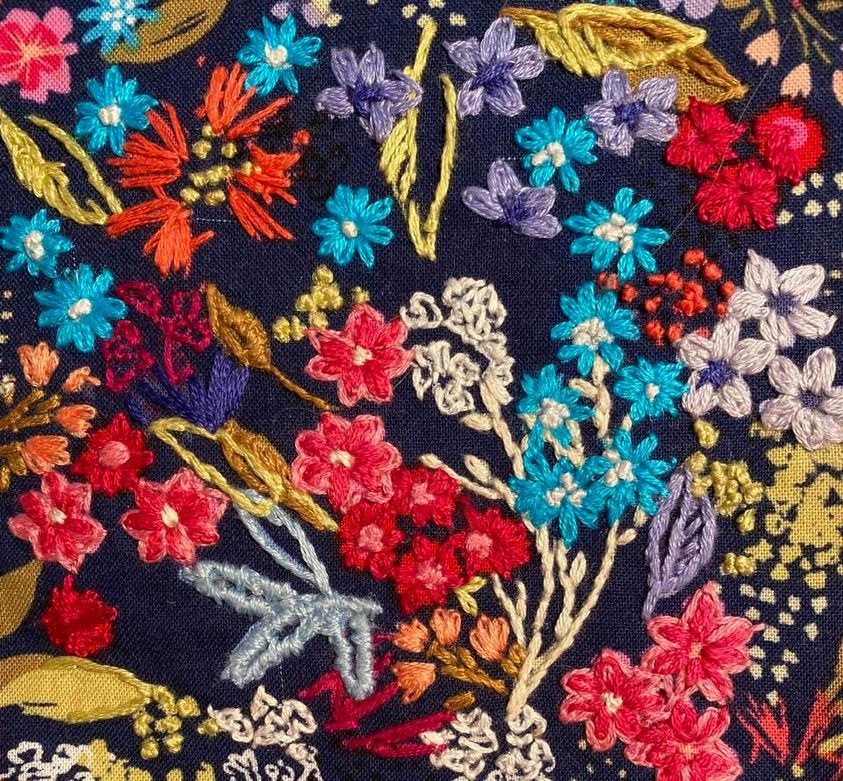 I embroider my garden. 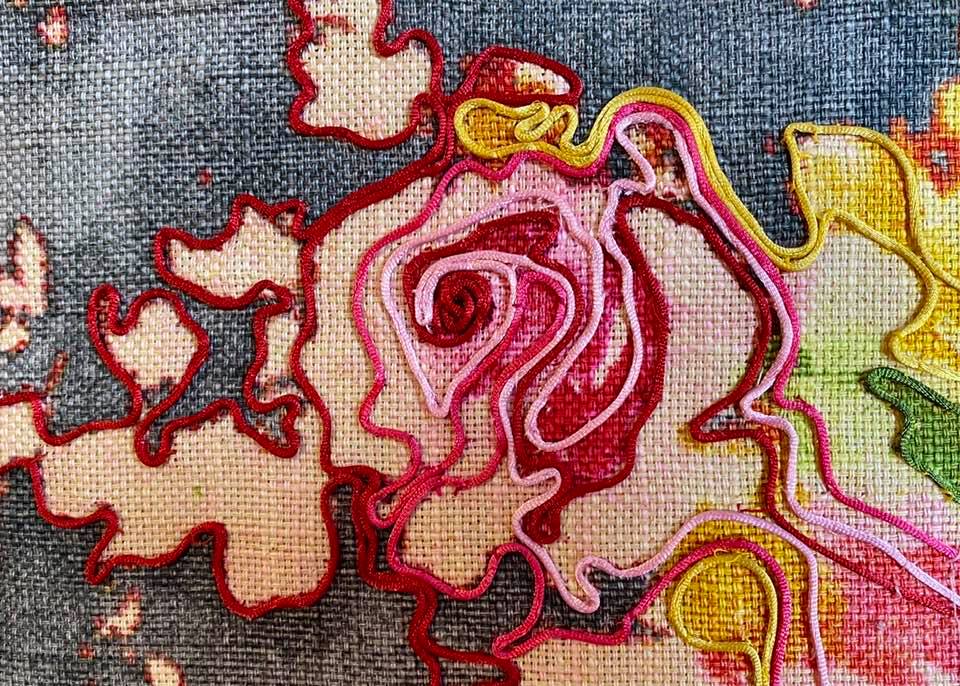 I also “draw” with satin cords on fabric. I believe that I may have invented this type of work, but I use satin cords that I order from China, and with tiny, hidden stitch, I hand sew them on fabric. 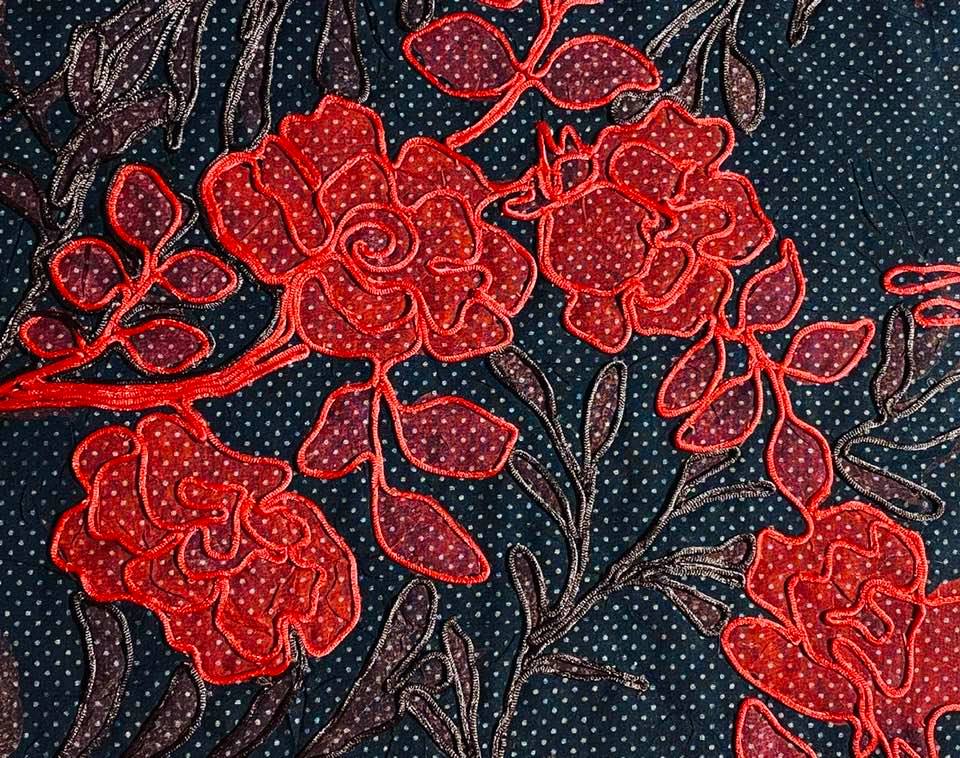 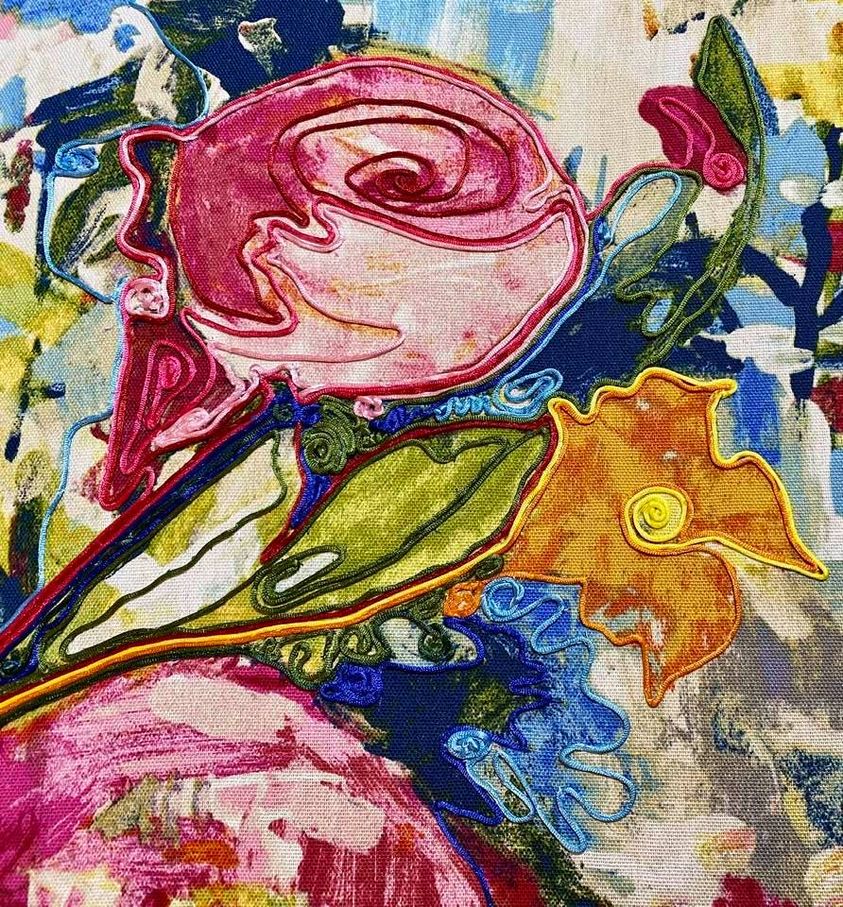 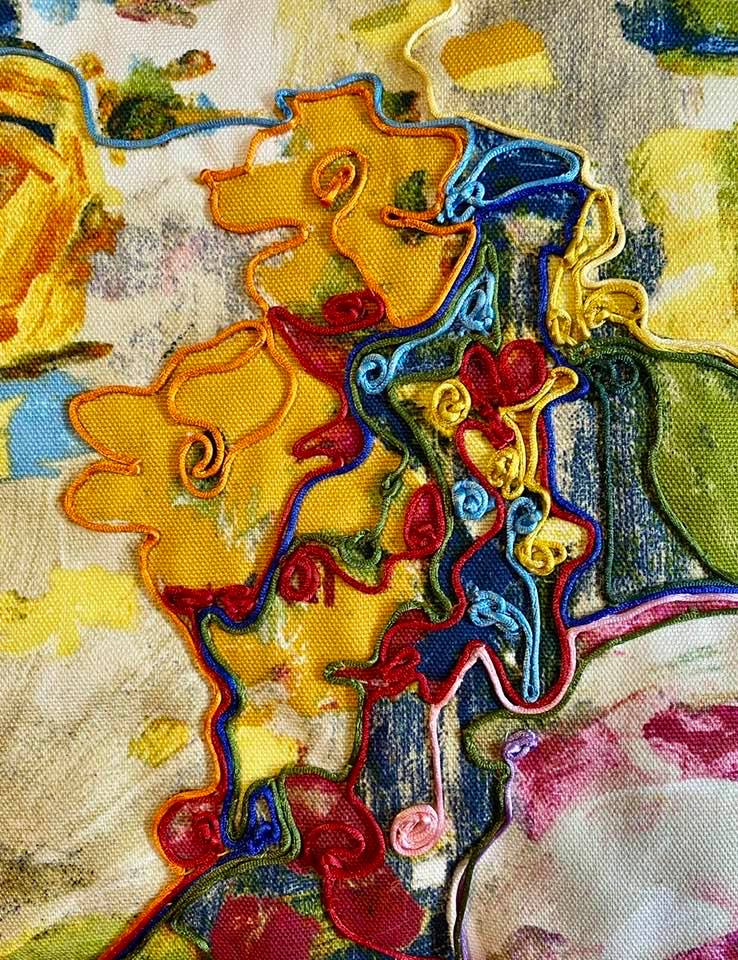 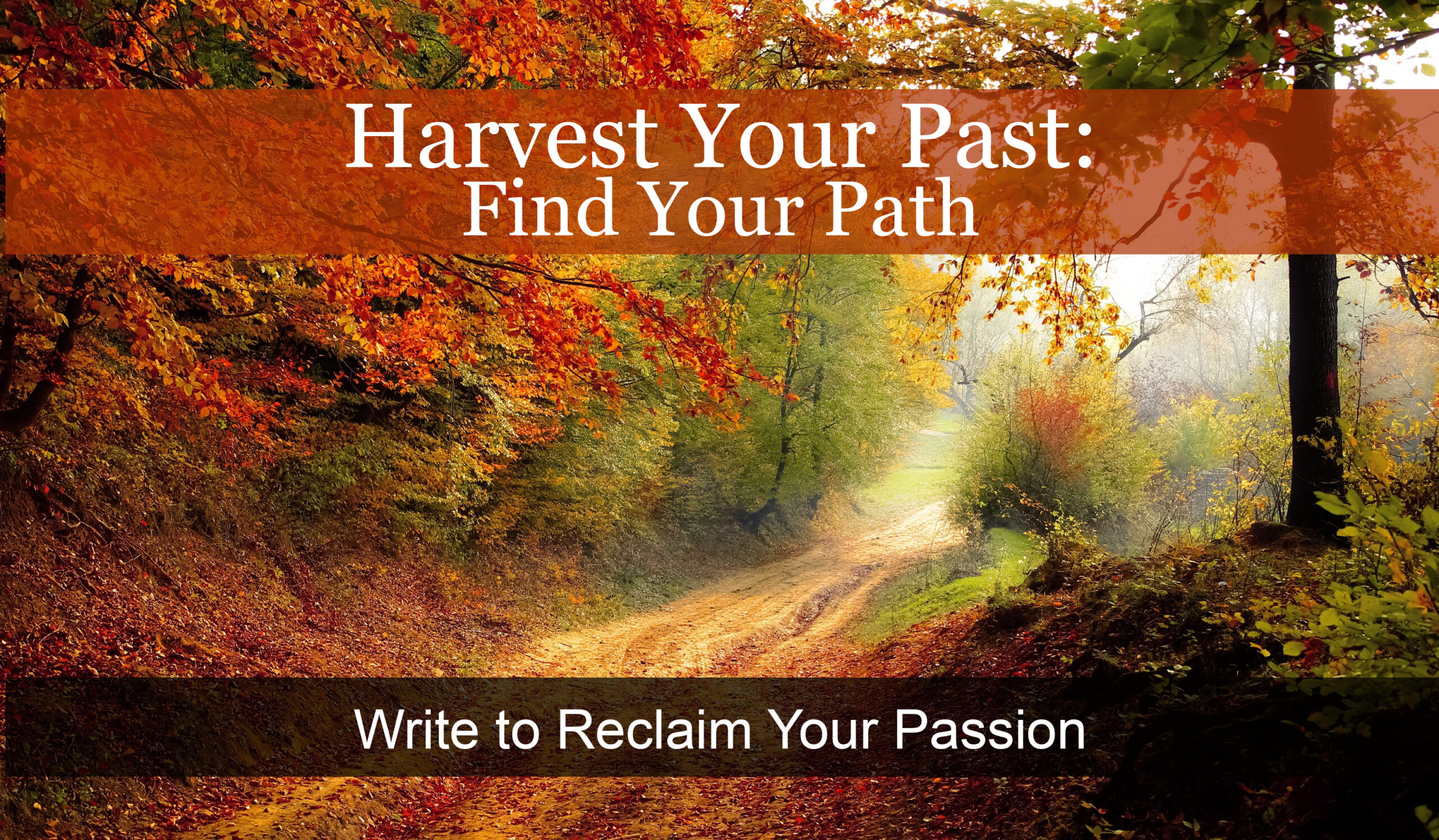 While I was living in New Jersey, I taught a class in Memoir writing, and I am in the process of creating a book from that series of lessons. Over the years, I have discovered that Memoir writing is a way that I can keep my creative veins flowing, and I heartily recommend it for blocked creatives. 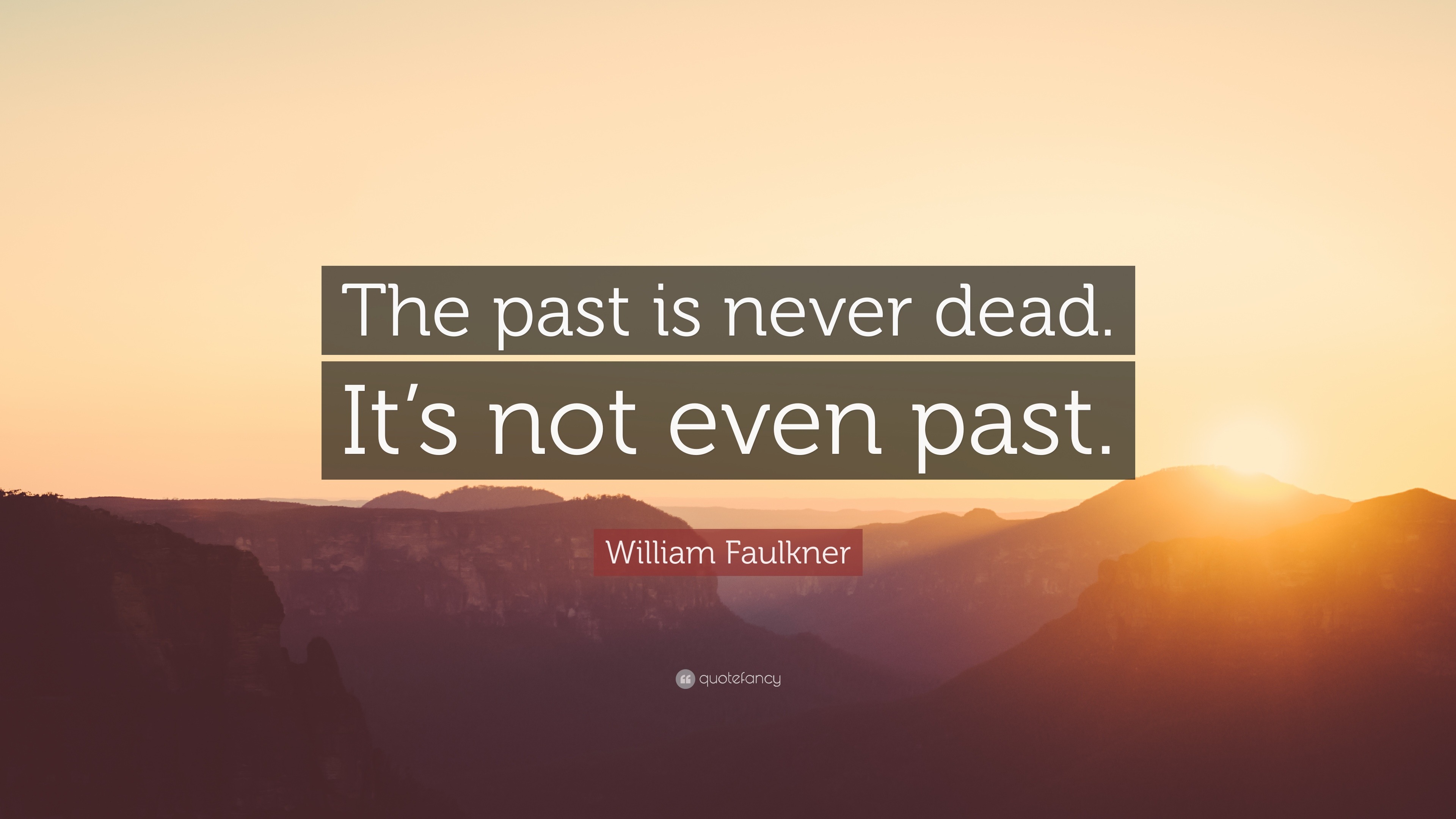 As Faulkner said, “The past is never dead. It’s not ever past.”

I have learned that since the past is always with me anyway, it is to my advantage to harness my memories and turn them into inspiration.

As I have said before, I recommend any kind of daily writing practice to combat writer’s and/or painter’s block.

Coats & Clark Thread Best for Hand Sewing – Color Chart
September 22, 2021 – The Day of Autumn Equinox – But I Am Shifting to the Light